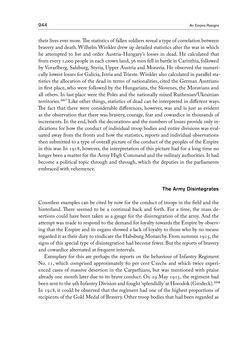 944 An Empire Resigns their lives ever more. The statistics of fallen soldiers reveal a type of correlation between bravery and death. Wilhelm Winkler drew up detailed statistics after the war in which he attempted to list and order Austria-Hungary’s losses in dead. He calculated that from every 1,000 people in each crown land, 36 men fell in battle in Carinthia, followed by Vorarlberg, Salzburg, Styria, Upper Austria and Moravia. He observed the numeri- cally lowest losses for Galicia, Istria and Trieste. Winkler also calculated in parallel sta- tistics the allocation of the dead in terms of nationalities, cited the German Austrians in first place, who were followed by the Hungarians, the Slovenes, the Moravians and all others. In last place were the Poles and the nationally mixed Ruthenian/Ukrainian territories.2267 Like other things, statistics of dead can be interpreted in different ways. The fact that there were considerable differences, however, was and is just as evident as the observation that there was bravery, courage, fear and cowardice in thousands of increments. In the end, both the decorations and the numbers of losses provide only in- dications for how the conduct of individual troop bodies and entire divisions was eval- uated away from the fronts and how the statistics, reports and individual observations then submitted to a type of overall picture of the conduct of the peoples of the Empire in this war. In 1918, however, the interpretation of this picture had for a long time no longer been a matter for the Army High Command and the military authorities. It had become a political topic through and through, which the deputies in the parliaments embraced with vehemence. The Army Disintegrates Countless examples can be cited by now for the conduct of troops in the field and the hinterland. There seemed to be a continual back and forth. For a time, the mass de- sertions could have been taken as a gauge for the disintegration of the army. And the attempt was made to respond to the demand for loyalty towards the Empire by observ- ing that the Empire and its organs showed a lack of loyalty to those who by no means regarded it as their duty to vindicate the Habsburg Monarchy. From summer 1915, the signs of this special type of disintegration had become fewer. But the reports of bravery and cowardice alternated at frequent intervals. Exemplary for this are perhaps the reports on the behaviour of Infantry Regiment No. 11, which comprised approximately 80 per cent Czechs and which twice experi- enced cases of massive desertion in the Carpathians, but was mentioned with praise already one month later due to its brave conduct. On 29 May 1915, the regiment had been sent to the 9th Infantry Division and fought ‘splendidly’ at Horodok (Grodeck).2268 In 1918, it could be observed that the regiment had one of the highest proportions of recipients of the Gold Medal of Bravery. Other troop bodies that had been regarded as
zurück zum  Buch THE FIRST WORLD WAR - and the End of the Habsburg Monarchy, 1914 – 1918"
THE FIRST WORLD WAR and the End of the Habsburg Monarchy, 1914 – 1918
Entnommen aus der FWF-E-Book-Library