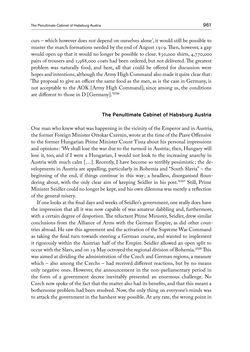 The﻿ Penultimate﻿ Cabinet﻿ of﻿ Habsburg﻿ Austria 961 curs  – which however does not depend on ourselves alone’, it would still be possible to muster the march formations needed by the end of August 1919. Then, however, a gap would open up that it would no longer be possible to close. 830,000 shirts, 4,770,000 pairs of trousers and 1,988,000 coats had been ordered, but not delivered. The greatest problem was naturally food, and here, all that could be offered for discussion were hopes and intentions, although the Army High Command also made it quite clear that : ‘The proposal to give an officer the same food as the men, as is the case in Germany, is not acceptable to the AOK [Army High Command], since among us, the conditions are different to those in D [Germany].’2326 The Penultimate Cabinet of Habsburg Austria One man who knew what was happening in the vicinity of the Emperor and in Austria, the former Foreign Minister Ottokar Czernin, wrote at the time of the Piave Offensive to the former Hungarian Prime Minister Count Tisza about his personal impressions and opinions : ‘We shall lose the war due to the turmoil in Austria ; then, Hungary will lose it, too, and if I were a Hungarian, I would not look to the increasing anarchy in Austria with much calm […]. Recently, I have become so terribly pessimistic ; the de- velopments in Austria are appalling, particularly in Bohemia and “South Slavia”  – the beginning of the end, if things continue in this way ; a headless, disorganised floun- dering about, with the only clear aim of keeping Seidler in his post.’2327 Still, Prime Minister Seidler could no longer be kept, and his own dilemma was merely a reflection of the general misery. If one looks at the final days and weeks of Seidler’s government, one really does have the impression that all it was now capable of was amateur dabbling and, furthermore, with a certain degree of despotism. The reluctant Prime Minister, Seidler, drew similar conclusions from the Alliance of Arms with the German Empire, as did other coun- tries abroad. He saw this agreement and the activation of the Supreme War Command as taking the final turn towards steering a German course, and wanted to implement it rigorously within the Austrian half of the Empire. Seidler allowed an open split to occur with the Slavs, and on 19 May octroyed the regional division of Bohemia.2328 This was aimed at dividing the administration of the Czech and German regions, a measure which  – also among the Czechs  – had received different reactions, but by no means only negative ones. However, the announcement in the non-parliamentary period in the form of a government decree inevitably presented an enormous challenge. No Czech now spoke of the fact that the matter also had its benefits, and that this meant a bothersome problem had been resolved. Now, the only thing on everyone’s minds was to attack the government in the harshest way possible. At any rate, the wrong point in
zurück zum  Buch THE FIRST WORLD WAR - and the End of the Habsburg Monarchy, 1914 – 1918"
THE FIRST WORLD WAR and the End of the Habsburg Monarchy, 1914 – 1918
Entnommen aus der FWF-E-Book-Library