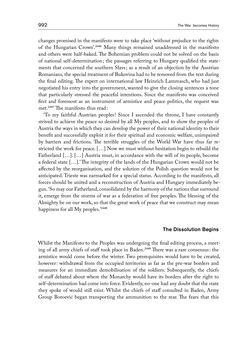 992 The War becomes History changes promised in the manifesto were to take place ‘without prejudice to the rights of the Hungarian Crown’.2446 Many things remained unaddressed in the manifesto and others were half-baked. The Bohemian problem could not be solved on the basis of national self-determination ; the passages referring to Hungary qualified the state- ments that concerned the southern Slavs ; as a result of an objection by the Austrian Romanians, the special treatment of Bukovina had to be removed from the text during the final editing. The expert on international law Heinrich Lammasch, who had just negotiated his entry into the government, wanted to give the closing sentences a tone that particularly stressed the peaceful intentions. Since the manifesto was conceived first and foremost as an instrument of armistice and peace politics, the request was met.2447 The manifesto thus read : ‘To my faithful Austrian peoples ! Since I ascended the throne, I have constantly strived to achieve the peace so desired by all My peoples, and to show the peoples of Austria the ways in which they can develop the power of their national identity to their benefit and successfully exploit it for their spiritual and economic welfare, unimpaired by barriers and frictions. The terrible struggles of the World War have thus far re- stricted the work for peace. […] Now we must without hesitation begin to rebuild the Fatherland […]. […] Austria must, in accordance with the will of its people, become a federal state […].’ The integrity of the lands of the Hungarian Crown would not be affected by the reorganisation, and the solution of the Polish question would not be anticipated. Trieste was earmarked for a special status. According to the manifesto, all forces should be united and a reconstruction of Austria and Hungary immediately be- gun. ‘So may our Fatherland, consolidated by the harmony of the nations that surround it, emerge from the storms of war as a federation of free peoples. The blessing of the Almighty be on our work, so that the great work of peace that we construct may mean happiness for all My peoples.’2448 The Dissolution Begins Whilst the Manifesto to the Peoples was undergoing the final editing process, a meet- ing of all army chiefs of staff took place in Baden.2449 There was a rare consensus : the armistice would come before the winter. Two prerequisites would have to be created, however : withdrawal from the occupied territories as far as the pre-war borders and measures for an immediate demobilisation of the soldiers. Subsequently, the chiefs of staff debated about where the Monarchy would have its borders after the right to self-determination had come into force. Evidently, no-one had any doubt that the state they spoke of would still exist. Whilst the chiefs of staff consulted in Baden, Army Group Boroević began transporting the ammunition to the rear. The fears that this
zurück zum  Buch THE FIRST WORLD WAR - and the End of the Habsburg Monarchy, 1914 – 1918"
THE FIRST WORLD WAR and the End of the Habsburg Monarchy, 1914 – 1918
Entnommen aus der FWF-E-Book-Library