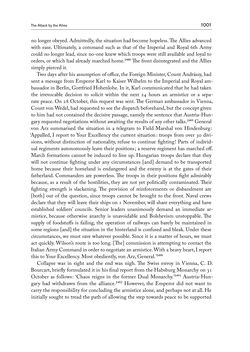 The﻿ Attack﻿ by﻿ the﻿ Allies 1001 no longer obeyed. Admittedly, the situation had become hopeless. The Allies advanced with ease. Ultimately, a command such as that of the Imperial and Royal 6th Army could no longer lead, since no-one knew which troops were still available and loyal to orders, or which had already marched home.2488 The front disintegrated and the Allies simply pierced it. Two days after his assumption of office, the Foreign Minister, Count Andrássy, had sent a message from Emperor Karl to Kaiser Wilhelm to the Imperial and Royal am- bassador in Berlin, Gottfried Hohenlohe. In it, Karl communicated that he had taken the irrevocable decision to solicit within the next 24 hours an armistice or a sepa- rate peace. On 28 October, this request was sent. The German ambassador in Vienna, Count von Wedel, had requested to see the dispatch beforehand, but the concept given to him had not contained the decisive passage, namely the sentence that Austria-Hun- gary requested negotiations without awaiting the results of any other talks.2489 General von Arz summarised the situation in a telegram to Field Marshal von Hindenburg : ‘Appalled, I report to Your Excellency the current situation : troops from over 30 divi- sions, without distinction of nationality, refuse to continue fighting ! Parts of individ- ual regiments autonomously leave their positions ; a reserve regiment has marched off. March formations cannot be induced to line up. Hungarian troops declare that they will not continue fighting under any circumstances [and] demand to be transported home because their homeland is endangered and the enemy is at the gates of their fatherland. Commanders are powerless. The troops in their positions fight admirably because, as a result of the hostilities, they are not yet politically contaminated. Their fighting strength is slackening. The provision of reinforcements or disbandment are [both] out of the question, since troops cannot be brought to the front. Naval crews declare that they will leave their ships on 1 November, will share everything and have established soldiers’ councils. Senior leaders unanimously demand an immediate ar- mistice, because otherwise anarchy is unavoidable and Bolshevism unstoppable. The supply of foodstuffs is failing, the operation of railways can barely be maintained in some regions [and] the situation in the hinterland is confused and bleak. Under these circumstances, we must save whatever possible. Since it is a matter of hours, we must act quickly. Wilson’s route is too long. [The] commission is attempting to contact the Italian Army Command in order to negotiate an armistice. With a heavy heart, I report this to Your Excellency. Most obediently, von Arz, General.’2490 Collapse was in sight and the end was nigh. The Swiss envoy in Vienna, C. D. Bourcart, briefly formulated it in his final report from the Habsburg Monarchy on 31 October as follows : ‘Chaos reigns in the former Dual Monarchy.’2491 Austria-Hun- gary had withdrawn from the alliance.2492 However, the Emperor did not want to carry the responsibility for concluding the armistice alone, and perhaps not at all. He initially sought to tread the path of allowing the step towards peace to be supported
zurück zum  Buch THE FIRST WORLD WAR - and the End of the Habsburg Monarchy, 1914 – 1918"
THE FIRST WORLD WAR and the End of the Habsburg Monarchy, 1914 – 1918
Entnommen aus der FWF-E-Book-Library