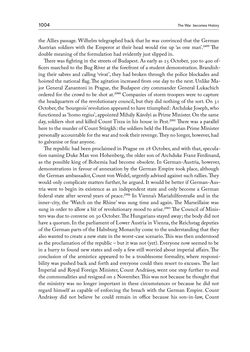 1004 The War becomes History the Allies passage. Wilhelm telegraphed back that he was convinced that the German Austrian soldiers with the Emperor at their head would rise up ‘as one man’.2499 The double meaning of the formulation had evidently just slipped in. There was fighting in the streets of Budapest. As early as 25 October, 300 to 400 of- ficers marched to the Bug River at the forefront of a student demonstration. Brandish- ing their sabres and calling ‘vivat’, they had broken through the police blockades and hoisted the national flag. The agitation increased from one day to the next. Unlike Ma- jor General Zanantoni in Prague, the Budapest city commander General Lukachich ordered for the crowd to be shot at.2500 Companies of storm troopers were to capture the headquarters of the revolutionary council, but they did nothing of the sort. On 31 October, the ‘bourgeois’ revolution appeared to have triumphed : Archduke Joseph, who functioned as ‘homo regius’, appointed Mihály Károlyi as Prime Minister. On the same day, soldiers shot and killed Count Tisza in his house in Pest.2501 There was a parallel here to the murder of Count Stürgkh : the soldiers held the Hungarian Prime Minister personally accountable for the war and took their revenge. They no longer, however, had to galvanise or fear anyone. The republic had been proclaimed in Prague on 28 October, and with that, specula- tion naming Duke Max von Hohenberg, the older son of Archduke Franz Ferdinand, as the possible king of Bohemia had become obsolete. In German-Austria, however, demonstrations in favour of annexation by the German Empire took place, although the German ambassador, Count von Wedel, urgently advised against such rallies. They would only complicate matters further, he argued. It would be better if German-Aus- tria were to begin its existence as an independent state and only become a German federal state after several years of peace.2502 In Vienna’s Mariahilferstraße and in the inner-city, the ‘Watch on the Rhine’ was sung time and again. The Marseillaise was sung in order to allow a bit of revolutionary mood to arise.2503 The Council of Minis- ters was due to convene on 30 October. The Hungarians stayed away ; the body did not have a quorum. In the parliament of Lower Austria in Vienna, the Reichstag deputies of the German parts of the Habsburg Monarchy come to the understanding that they also wanted to create a new state in the worst-case scenario. This was then understood as the proclamation of the republic  – but it was not (yet). Everyone now seemed to be in a hurry to found new states and only a few still worried about imperial affairs. The conclusion of the armistice appeared to be a troublesome formality, where responsi- bility was pushed back and forth and everyone could then resort to excuses. The last Imperial and Royal Foreign Minister, Count Andrássy, went one step further to end the commonalities and resigned on 2 November. This was not because he thought that the ministry was no longer important in these circumstances or because he did not regard himself as capable of enforcing the breach with the German Empire. Count Andrássy did not believe he could remain in office because his son-in-law, Count
zurück zum  Buch THE FIRST WORLD WAR - and the End of the Habsburg Monarchy, 1914 – 1918"
THE FIRST WORLD WAR and the End of the Habsburg Monarchy, 1914 – 1918
Entnommen aus der FWF-E-Book-Library