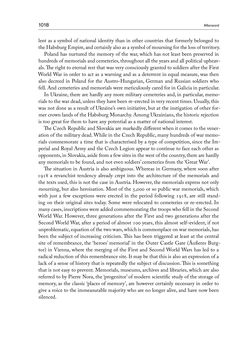 1018 Afterword lent as a symbol of national identity than in other countries that formerly belonged to the Habsburg Empire, and certainly also as a symbol of mourning for the loss of territory. Poland has nurtured the memory of the war, which has not least been preserved in hundreds of memorials and cemeteries, throughout all the years and all political upheav- als. The right to eternal rest that was very consciously granted to soldiers after the First World War in order to act as a warning and as a deterrent in equal measure, was then also decreed in Poland for the Austro-Hungarian, German and Russian soldiers who fell. And cemeteries and memorials were meticulously cared for in Galicia in particular. In Ukraine, there are hardly any more military cemeteries and, in particular, memo- rials to the war dead, unless they have been re-erected in very recent times. Usually, this was not done as a result of Ukraine’s own initiative, but at the instigation of other for- mer crown lands of the Habsburg Monarchy. Among Ukrainians, the historic rejection is too great for them to have any potential as a matter of national interest. The Czech Republic and Slovakia are markedly different when it comes to the vener- ation of the military dead. While in the Czech Republic, many hundreds of war memo- rials commemorate a time that is characterised by a type of competition, since the Im- perial and Royal Army and the Czech Legion appear to continue to face each other as opponents, in Slovakia, aside from a few sites in the west of the country, there are hardly any memorials to be found, and not even soldiers’ cemeteries from the ‘Great War’. The situation in Austria is also ambiguous. Whereas in Germany, where soon after 1918 a revanchist tendency already crept into the architecture of the memorials and the texts used, this is not the case in Austria. However, the memorials express not only mourning, but also heroisation. Most of the 5,000 or so public war memorials, which with just a few exceptions were erected in the period following 1918, are still stand- ing on their original sites today. Some were relocated to cemeteries or re-erected. In many cases, inscriptions were added commemorating the troops who fell in the Second World War. However, three generations after the First and two generations after the Second World War, after a period of almost 100 years, this almost self–evident, if not unproblematic, equation of the two wars, which is commonplace on war memorials, has been the subject of increasing criticism. This has been triggered at least at the central site of remembrance, the ‘heroes’ memorial’ in the Outer Castle Gate (Äußeres Burg- tor) in Vienna, where the merging of the First and Second World Wars has led to a radical reduction of this remembrance site. It may be that this is also an expression of a lack of a sense of history that is repeatedly the subject of discussion. This is something that is not easy to prevent. Memorials, museums, archives and libraries, which are also referred to by Pierre Nora, the ‘progenitor’ of modern scientific study of the storage of memory, as the classic ‘places of memory’, are however certainly necessary in order to give a voice to the immeasurable majority who are no longer alive, and have now been silenced.
zurück zum  Buch THE FIRST WORLD WAR - and the End of the Habsburg Monarchy, 1914 – 1918"
THE FIRST WORLD WAR and the End of the Habsburg Monarchy, 1914 – 1918
Entnommen aus der FWF-E-Book-Library