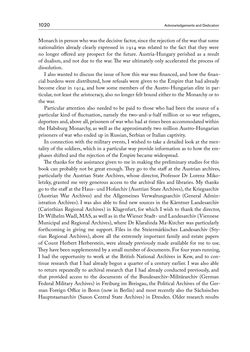 1020 Acknowledgements and Dedication Monarch in person who was the decisive factor, since the rejection of the war that some nationalities already clearly expressed in 1914 was related to the fact that they were no longer offered any prospect for the future. Austria-Hungary perished as a result of dualism, and not due to the war. The war ultimately only accelerated the process of dissolution. I also wanted to discuss the issue of how this war was financed, and how the finan- cial burdens were distributed, how refusals were given to the Empire that had already become clear in 1914, and how some members of the Austro-Hungarian elite in par- ticular, not least the aristocracy, also no longer felt bound either to the Monarchy or to the war. Particular attention also needed to be paid to those who had been the source of a particular kind of fluctuation, namely the two-and-a-half million or so war refugees, deportees and, above all, prisoners of war who had at times been accommodated within the Habsburg Monarchy, as well as the approximately two million Austro-Hungarian prisoners of war who ended up in Russian, Serbian or Italian captivity. In connection with the military events, I wished to take a detailed look at the men- tality of the soldiers, which in a particular way provide information as to how the em- phases shifted and the rejection of the Empire became widespread. The thanks for the assistance given to me in making the preliminary studies for this book can probably not be great enough. They go to the staff at the Austrian archives, particularly the Austrian State Archives, whose director, Professor Dr Lorenz Miko- letzky, granted me very generous access to the archival files and libraries. My thanks go to the staff at the Haus- und Hofarchiv (Austrian State Archives), the Kriegsarchiv (Austrian War Archives) and the Allgemeines Verwaltungsarchiv (General Admin- istration Archives). I was also able to find new sources in the Kärntner Landesarchiv (Carinthian Regional Archives) in Klagenfurt, for which I wish to thank the director, Dr Wilhelm Wadl, MAS, as well as in the Wiener Stadt- und Landesarchiv (Viennese Municipal and Regional Archives), where Dr Klaralinda Ma-Kircher was particularly forthcoming in giving me support. Files in the Steiermärkisches Landesarchiv (Sty- rian Regional Archives), above all the extremely important family and estate papers of Count Herbert Herberstein, were already previously made available for me to use. They have been supplemented by a small number of documents. For four years running, I had the opportunity to work at the British National Archives in Kew, and to con- tinue research that I had already begun a quarter of a century earlier. I was also able to return repeatedly to archival research that I had already conducted previously, and that provided access to the documents of the Bundesarchiv-Militärarchiv (German Federal Military Archives) in Freiburg im Breisgau, the Political Archives of the Ger- man Foreign Office in Bonn (now in Berlin) and most recently also the Sächsisches Hauptstaatsarchiv (Saxon Central State Archives) in Dresden. Older research results
zurück zum  Buch THE FIRST WORLD WAR - and the End of the Habsburg Monarchy, 1914 – 1918"
THE FIRST WORLD WAR and the End of the Habsburg Monarchy, 1914 – 1918
Entnommen aus der FWF-E-Book-Library