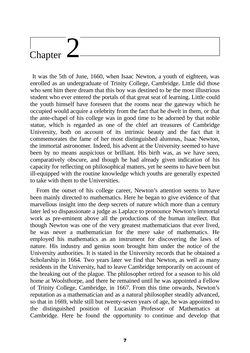 2Chapter It was the 5th of June, 1660, when Isaac Newton, a youth of eighteen, was enrolled as an undergraduate of Trinity College, Cambridge. Little did those who sent him there dream that this boy was destined to be the most illustrious student who ever entered the portals of that great seat of learning. Little could the youth himself have foreseen that the rooms near the gateway which he occupied would acquire a celebrity from the fact that he dwelt in them, or that the ante-chapel of his college was in good time to be adorned by that noble statue, which is regarded as one of the chief art treasures of Cambridge University, both on account of its intrinsic beauty and the fact that it commemorates the fame of her most distinguished alumnus, Isaac Newton, the immortal astronomer. Indeed, his advent at the University seemed to have been by no means auspicious or brilliant. His birth was, as we have seen, comparatively obscure, and though he had already given indication of his capacity for reflecting on philosophical matters, yet he seems to have been but ill-equipped with the routine knowledge which youths are generally expected to take with them to the Universities. From the outset of his college career, Newton’s attention seems to have been mainly directed to mathematics. Here he began to give evidence of that marvellous insight into the deep secrets of nature which more than a century later led so dispassionate a judge as Laplace to pronounce Newton’s immortal work as pre-eminent above all the productions of the human intellect. But though Newton was one of the very greatest mathematicians that ever lived, he was never a mathematician for the mere sake of mathematics. He employed his mathematics as an instrument for discovering the laws of nature. His industry and genius soon brought him under the notice of the University authorities. It is stated in the University records that he obtained a Scholarship in 1664. Two years later we find that Newton, as well as many residents in the University, had to leave Cambridge temporarily on account of the breaking out of the plague. The philosopher retired for a season to his old home at Woolsthorpe, and there he remained until he was appointed a Fellow of Trinity College, Cambridge, in 1667. From this time onwards, Newton’s reputation as a mathematician and as a natural philosopher steadily advanced, so that in 1669, while still but twenty-seven years of age, he was appointed to the distinguished position of Lucasian Professor of Mathematics at Cambridge. Here he found the opportunity to continue and develop that 7
zurück zum  Buch Great Astronoms - Isaac Newton"
Great Astronoms Isaac Newton