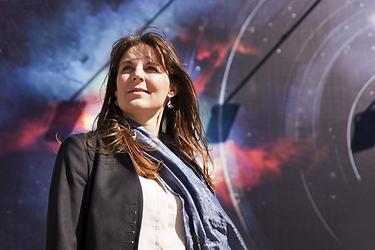 Do what fascinates you!

This is the credo of the Austrian astro-physicist that is currently building up her own "Carl Sagan Institute" at the famous Cornell University in the USA.

Lisa Kaltenegger was born in Kuchl (Salzburg). From the University of Graz she moved to the European Space Agency (ESA) in the Netherlands and at age 27 to Harvard University.

2010 she was awarded an Emmy Noether research group in Germany and took it to the Max Planck institut fuer Astronomie in Heidelberg. She joined the faculty at Cornell in 2014.

Among her recent awards are the Heinz Meier Leibnitz Prize for Physics of Germany in 2012, one of 27 Role models in science and research in 2012, the Christian Doppler prize for Innovation in science of Salzburg in 2014 and the KAVLI Foundation prize lecture in 2015. 2012 she was selected as one of 27 Role Models for women in science by the European Commission, 2007 she received the Smithsonian Magazine Award for America's Young innovators.

2015 she published her first popular science book about the search for life in the universe (ecowin): Sind wir allein im Universum?