(Some material below is based on the English Wikipedia contribution quoted at the bottom. Since Edison is considered THE US icon of an inventor, the report ingores important aspects of Teslas's life and research, including the idea to distribute energy wireless, as shown in a large experiment in Colorado. It is also curious that Marconi and Braun got the Noble price in Phyiscs in 1908, although much of it based on earlrier results obtaiend by Tesla). 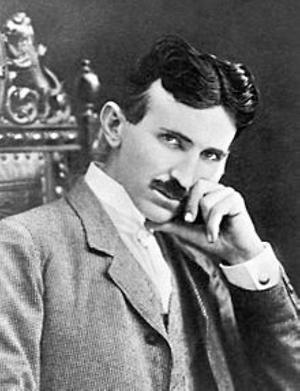 Nikola Tesla around 1890, Photo: Public domain, due to Napoleon Sarony - postcard 1890, scanned from his collection in 2007

Early engieneering education was at Graz University of Technology. His main projecst involved altnating current, highfrequency and high power experiments, sending signals and early atemtps at tansmission of signals over long idistances. He was a prodgius inventor, electrical engineer, mechanical engineer, and futurist, but best known for his contributions to the design of the modern alternating current (AC) electricity supply system.

Born and raised in the Austrian Empire, Tesla studied engineering and physics in the 1870s without receiving a degree, and gained practical experience in the early 1880s working in telephony and at Continental Edison in the new electric power industry.

He emigrated in 1884 to the United States, where he would become a naturalized citizen. He worked for a short time at the Edison Machine Works in New York City before he struck out on his own because of promises broken by Edison, and their opposing view of advanatages of direct current (Edison) and Tesla (correct) judgement for alterantiong current.

With the help of partners to finance and market his ideas, Tesla set up laboratories and companies in New York to develop a range of electrical and mechanical devices. His alternating current (AC) induction motor and related polyphase AC patents, licensed by Westinghouse Electric in 1888, earned him a considerable amount of money and became the cornerstone of the polyphase system which that company would eventually market.

His sprobabyl biggest success was that all electric engery generated by the Niagra falls was produced and distributed using his ideas of altrnating current.

Attempting to develop inventions he could patent (300 pantenst, some 211 in the US) and market, Tesla conducted a range of experiments with mechanical oscillators/generators, electrical discharge tubes, and early X-ray imaging. He also built a wireless-controlled boat, one of the first ever exhibited.

Tesla became well known as an inventor and would demonstrate his achievements to celebrities and wealthy patrons at his lab, and was noted for his showmanship at public lectures. Throughout the 1890s, Tesla pursued his ideas for wireless lighting and worldwide wireless electric power distribution in his high-voltage, high-frequency power experiments in New York and Colorado Springs.

Tesla experimented with a series of inventions in the 1910s and 1920s with varying degrees of success. Having spent most of his money, Tesla lived in a series of New York hotels, leaving behind unpaid bills. He died in New York City in January 1943. Tesla's work fell into relative obscurity following his death, until 1960, when the General Conference on Weights and Measures named the SI unit of magnetic flux density the TESLA in his honor.

There has been a resurgence in popular interest in Tesla since the 1990s.

Extended German Biography
Book on Tesla The Austria-Fourm will try to make this book readable free of charge before too long.