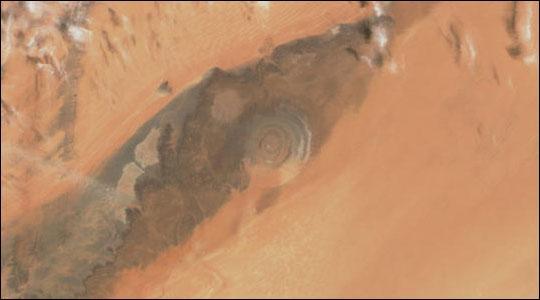 Image courtesy of NASA., under PD
The Richat Structure, a prominent circular feature in the Sahara Desert of Mauritania, has attracted attention since the earliest space missions because it forms a conspicuous bulls-eye in the otherwise rather featureless expanse of the Gres de Chinguetti Plateau in central Mauritania.

The Structure, which has a diameter of almost 50 km (30 mi), has become a landmark for space shuttle crews. Initially interpreted as a meteorite impact structure, it is now thought to be merely a symmetrical uplift (circular anticline) laid bare by erosion.