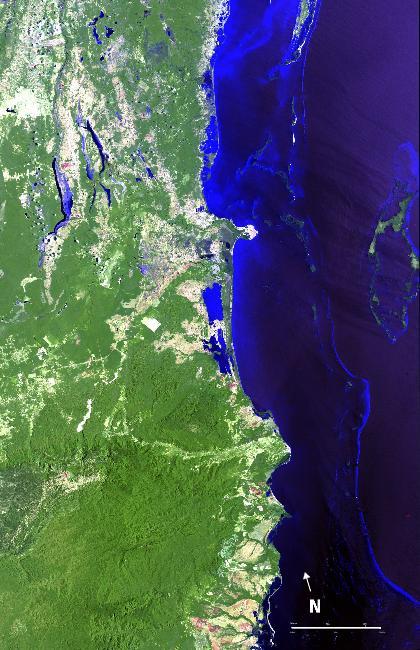 Image courtesy of NASA., under PD
A view of the Belize Barrier Reef, the longest coral reef in the Western and Northern Hemispheres and second largest worldwide (after the Great Barrier Reef of Australia). Running the entire coastline of Belize in Central America, the Belize Barrier Reef supports a large number of patch reefs, shoals, and over 1,000 islands called "cayes."

Most of these cayes, and the entire coastline of the country outside of settlements, are protected by huge forests of mangrove. The Turneffe Atoll is shown on the right side of the image. As one of three large coral atolls outside of the reef, it stretches over 48 km (30 mi) long and 16 km (10 mi) wide and is surrounded by one of the most fertile marine ecosystems in the world - a natural nursery for fish, sharks, and crocodiles.

Belize City is situated on the outlet of land near the center of the image. It is the largest city in Belize and is the nations principal port and its financial and industrial hub.