I was amazed by Easter Island the minute I walked across the field of the local airport. Rich, vibrant colors made me feel like a Disney cartoon character. Later that evening I went sightseeing with my friend Dima and wound up on the shore of the Pacific Ocean. It was the second time I lost my breath: the local color palette was beyond my imagination. 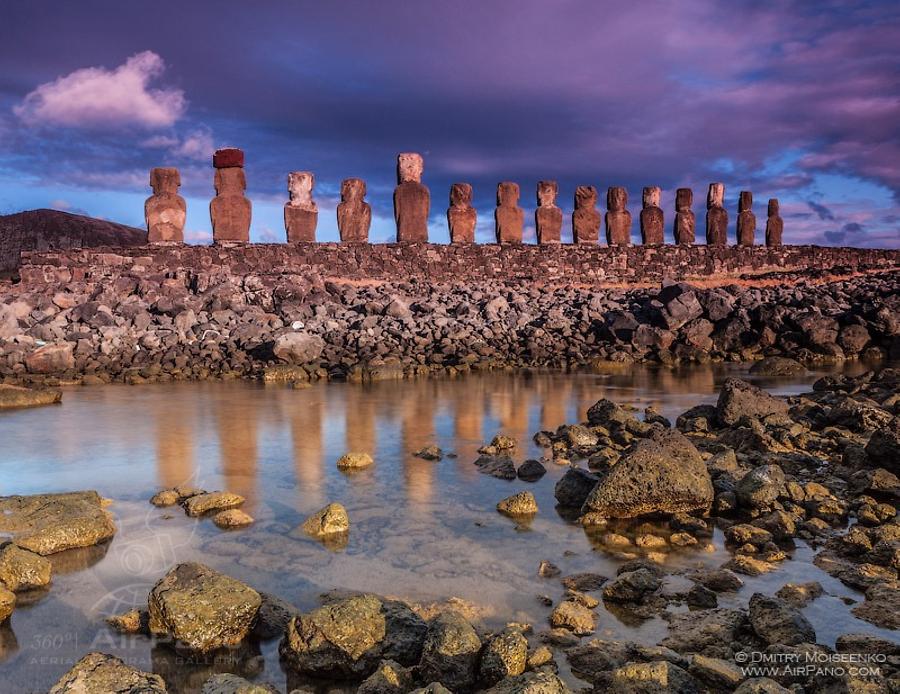 Of course we couldn't help but try to shoot something the same evening. But vigilant rangers saw our equipment and asked to get the official photo permit first. Locals are very concerned about the safety of Moai, the famous giant statues of Easter Island. You can easily get in jail if you harm the statues in any way.

The next morning we went to the National Park's administration office. The director was absent so his colleagues suggested we fill out the photo permit application, which was 5 pages long and in Spanish

We didn't know Spanish very well. Only "hi", "good bye", and "check, please". Mister Hutu, the director, arrived about 30 minutes later riding his little motorcycle. Having learned about our situation, Mr. Hutu explained us how one can get the permit: you need to fill out this very form in Spanish, scan it, mail it and wait for 10 to 15 days. And we had only 1 day... So Dima had to use his power of persuasion to the maximum. He told Mr. Hutu about our non-profit project and showed examples of panoramic photos on his laptop.

To cut a long story short, we got our official photo permit in 10 minutes. Mr. Hutu didn't hesitate to take responsibility and issued us the permit, and in that regard he surprised us very much (we hadn't met such an easy going official before). He didn't even take our money. But there were conditions: we had to be accompanied by a local ranger, the young man named Kawa. Furthermore, Mr. Hutu asked us to send him a copy of our photographs. He said they would be used as educational materials in local schools. 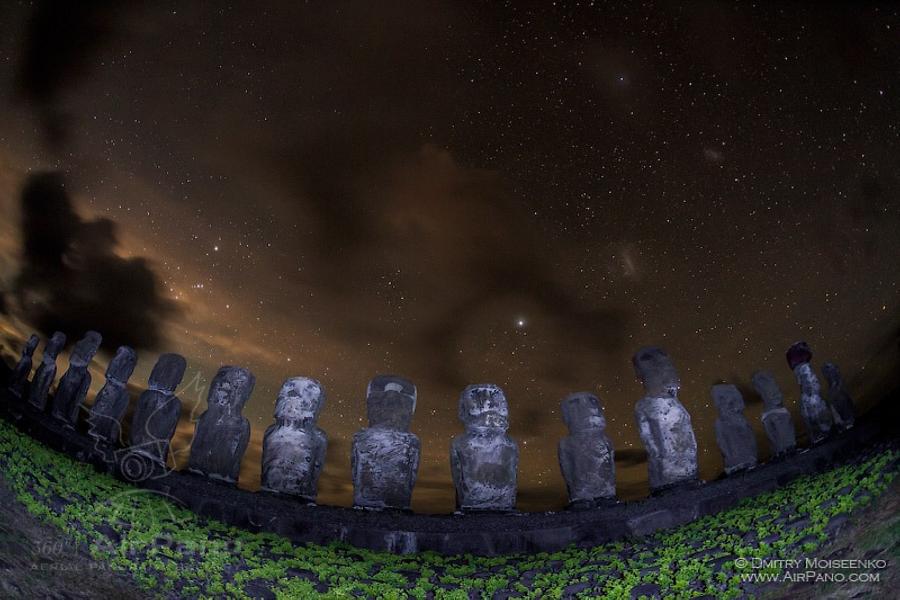 Moais of Easter Island at night

As soon as we were finished, we rushed to take pictures. At first, Kawa was very suspicious of our radio-controlled helicopter, but after few launches he got excited just like we were and helped us in any way he could. From that moment on, we didn't have to look at the map — we just followed Kawa's directions. Every time local rangers (usually very strict looking) noticed Kawa, they gave us big smiles and showed best spots for shooting.

To our big surprise, there weren't that many standing statues on the famous Easter Island. Instead, most of them were lying in different poses. Most of the time they were "with their face in the salad", as one famous blogger said. Some Moai were restored and cemented on ceremonial grounds of Tongariki, Anakena, Tahai, Ahu Akivi. And only on the slopes of Rano Raraku volcano the statues the give you the most authentic impression. Giant figures are in different stages of completeness: they are shoulder deep in the ground or even merged with the walls of the dead volcano. 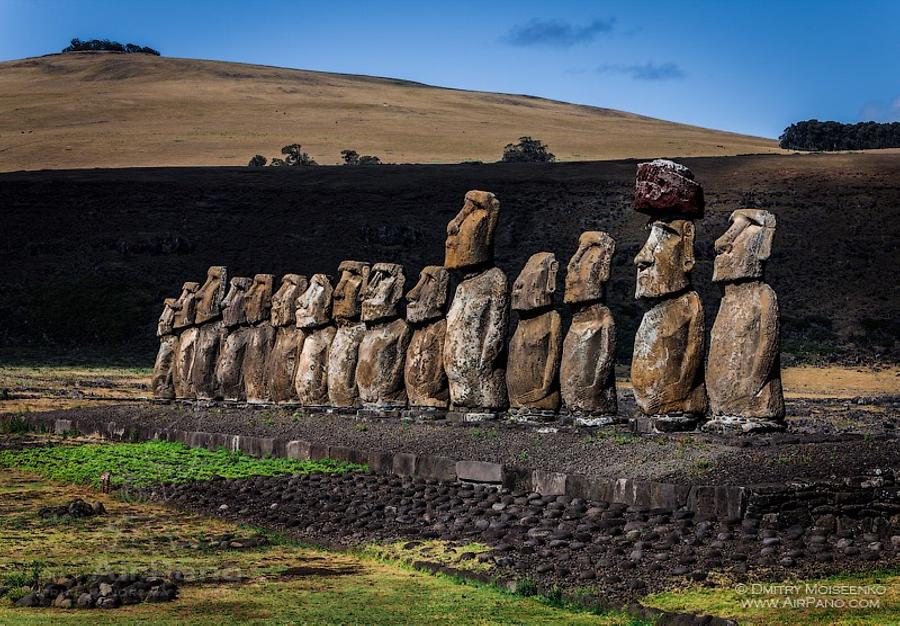 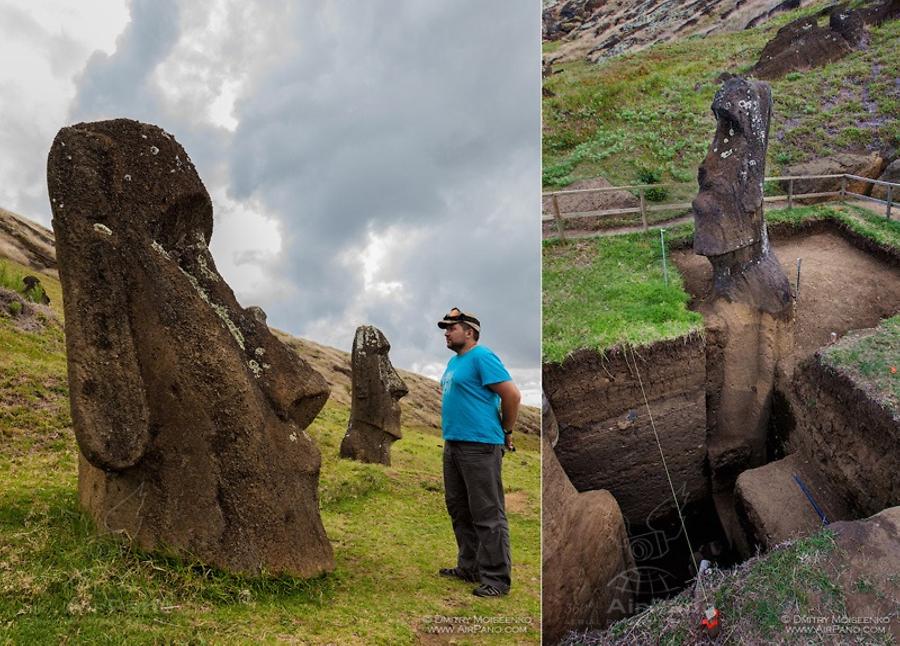 Most of the tourists don't see these sights because only standard paths are open for public in the park. We had to go beyond our piloting skills to photograph places that are not available to ordinary tourists. Only the view from above can show us the scale of this "factory of idols" made of volcanic rock of these very crater's walls. So one could say that we were able to lift the veil of mystery covering Easter Island.

But first we had to endure a very bad weather. The first two days of the shooting were rainy and gloomy. The next morning, right before our departure, we had to work hard to retake photos of main locations of the ancient statues. Of course, two days were not enough to carefully explore this little piece of land forsaken in the middle of the Pacific ocean. But our three-week trip to Peru and Chili was coming to an end and we had to pack our bags and leave the island. 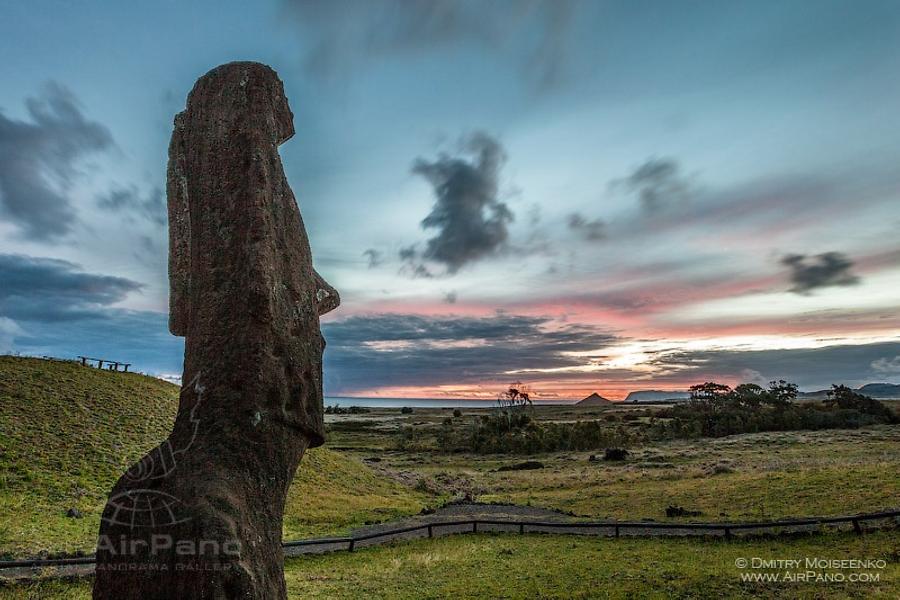 The legendary Moai statues were not the only thing that fascinated me on Easter Island. There is a little local restaurant on the bay that serves fresh fish, which name I couldn't possibly pronounce. I would return to the island any time just to taste that fish again.

And now we'll share some information about the island:

The AirPano team has photographed a great number of amazing places on the planet for the last several years. However nothing can compare with Easter Island, the most remote inhabitant piece of land in the world. This small island (164 sq km) holds the greatest number of unsolved mysteries.

Pick any fact from the long list and it would send your mind spinning with different mystery theories. However if you see those mysteries as a unified system, as links of one chain, suddenly, the veil of the great mystery is lifted. There is much more to this island than meets the eye. There are phenomena, which are absolutely untypical not only to this region but also to the natives. 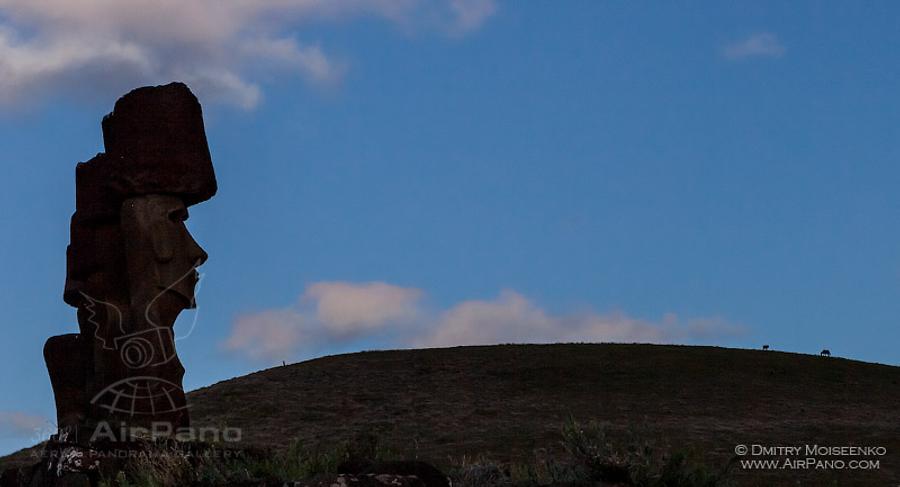 Moais of Easter Island at evening

Beside its name, which was given to Easter Island by Jacob Roggeveen, the God-loving Dutch explorer, the island has at least eight other names. Among them are Te Pito O Te Henua, which means "the Navel of the World", and Mata Ki Te Rangi, which can be translated as "Eyes looking to the sky". Rapa Nui, Easter Island's native population of 4 thousand people, has the richest and absolutely unique mythology. Furthermore, this is the only island in the entire Polynesian region that developed a written language. And of course, we have to mention the main tourist attraction of Easter Island — famous moai statues. These monoliths are made of solidified volcanic ash. They are up to 20 meters tall, and each of them weights over 20 tons. There are total of 997 moai statues on Easter Island.

The only question scientists were able to answer so far (thanks to the experiment of Thor Heyerdahl, famous Norwegian traveler) is how the statues were moved from stone quarries and set around the island with limited technologies available at that time. The explanation turned out to be quite simple: Rapa Nui people showed moving devices that they made of wood and rocks.

But it didn't explain the purpose of moai statues and whom they portrayed. The elongated heads don't look exactly human. Erich von Daniken, a Swiss novelist, had his own theory. He suggested that long time ago an alien space ship broke down and ET were forced to land on the island. While repairing the space ship, they had fun casting each other in stone. This is why moai statues have such non-human elongated faces. This also explains one of the island's names — "Eyes looking to the sky" As soon as the space ship was fixed, extra terrestrial visitors departed leaving the statues behind, many of them unfinished.

Helena Blavatsky, a philosopher and occultist, believed that Easter Island was a part of mythical country Lemuria. Along with Lemurians, survivors of lost Atlantis, also populated this country. Both races were 7 to 18 meters tall. This is why it was not so hard for the giants to make and install these monoliths.

There is one more mysterious (and still unsolved) question: why did one of the emperors of the ancient Inca visit such a remote island? And he was not just a common emperor, he was the one who ruled during Golden Age of the Inca Empire, and whose father built Machu Picchu, the famous Peru landmark.

Throw in a unique — still undeciphered by scientists — ancient written language, along with a cult of a mystical Bird Man, and all pieces of the puzzle will fall together. 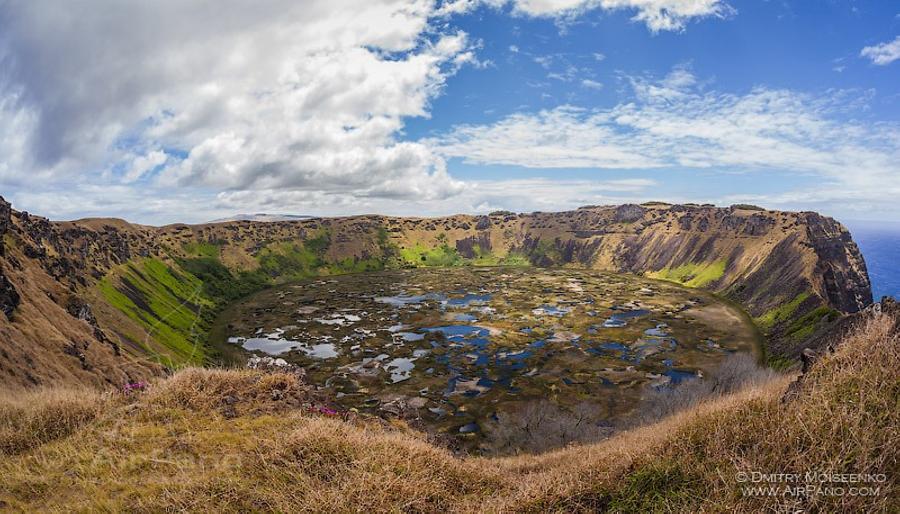 Yes, there was a non-human civilization on this island. It could be aliens, people of Atlantis, or ancestors of the ancient Inca (whose mysteries are also unsolved by modern science). Yes, that civilization vanished (or returned to their home planet). And yes, along with a number of mysteries, it also left us a proof of its existence: the written language, the mythology and the giant monuments, which common aboriginals of this "middle-of-nowhere" island would not care for. There are thousands of similar islands in the world, but none of them has such a unique and mysterious culture as Easter Island.

Who knows, perhaps by looking at our photographs from Easter Island or traveling with our aerial panoramas you will be able to find the answers?

Compare the size of statues and the height of man 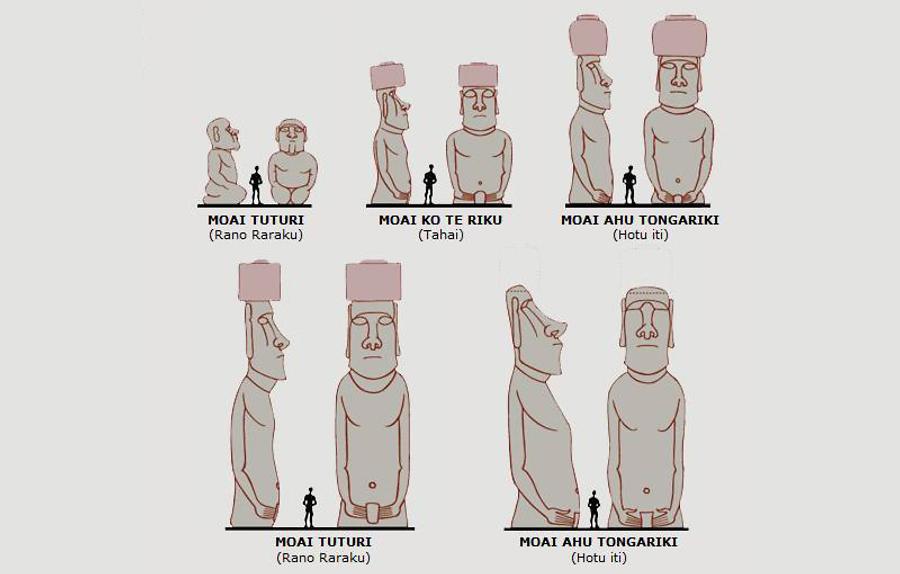 Compare the size of statues and the height of man 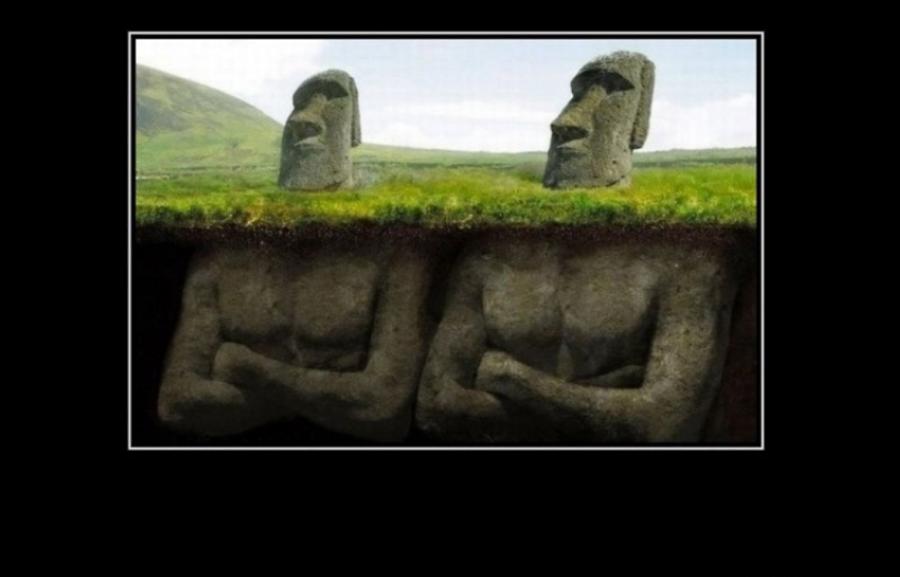