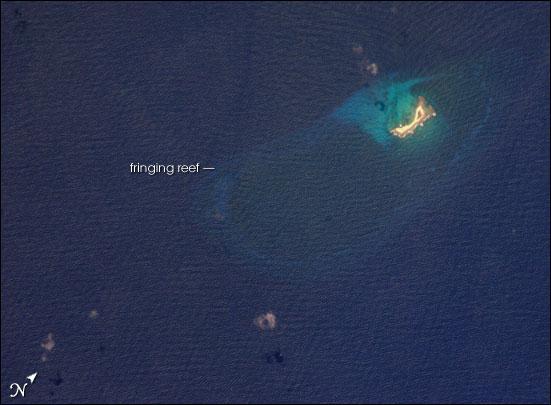 Image courtesy of NASA., under PD
Aves Island (Island of the Birds) lies west of the Lesser Antilles in the Caribbean. It provides a nesting site to green sea turtles and, of course, birds. Because the abundant bird droppings, known as guano, could be used in fertilizer and gunpowder, guano miners worked on the island during the late 19th and early 20th centuries until they depleted the supply.

Since its discovery by Europeans, likely in the late 16th century, Aves Island was claimed by several European nations. The island is currently claimed by Venezuela, although disputes about ownership of the island, and the surrounding exclusive economic zone in the Caribbean, continue today.

Aves Island is small - only 0.5 by 0.2 km (0.3 by 0.1 mi) - and its highest point stands just 4 m (13 ft) above sea level. In hurricanes, the island can be completely submerged. In 1980, Hurricane Allen split the island in two, but subsequent coral reef growth reunited the two halves.

This astronaut photograph is a rare, almost cloud-free, view of the island and the submerged fringing coral reef that surrounds it. The fringing reef is barely visible, appearing as a ring slightly lighter in color than the ocean water. The crosshatch-like pattern of roughness on the surrounding sea surface is most likely caused by variable winds at the time of image acquisition.