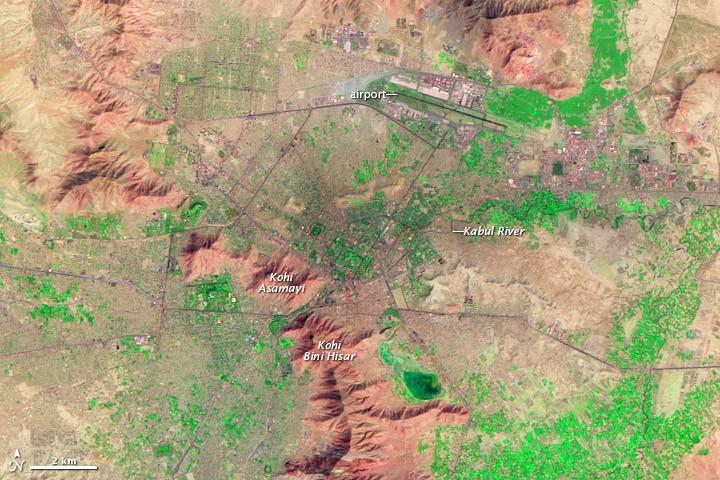 Photo courtesy of NASA., under PD
For more than 3,000 years, Kabul Kabul, Afghanistan has occupied a strategic location along Central and Southern Asian trade routes.

In the late eighteenth century, Kabul was established as Afghanistans capital. In this false-color satellite image vegetation appears fluorescent green, urban areas range in color from gray to black, and bare ground varies in color from beige to reddish brown.

A mountain range, including Kohi Asamayi and Kohi Bini Hisar, snakes through the scene, running roughly northwest-southeast. More peaks appear in the northeast, right next to an airport. Urbanization appears densest at the citys center, just southwest of the airport, and it stretches out toward the right side of the image along an east-west highway.

Leaping a mountain boundary, cityscape also fills the lower-left quadrant of the image. Partly constrained by surrounding mountains, Kabuls primary direction for growth has been vertical, with multistory buildings constructed atop existing structures.