Armenia: Beauty in the Stone#

Photos by Sergey Semenov, Max Nasekin, and Yury Kravtsov, members of the AirPano Team that is a member of the global-geography consortium with kind permission of AirPano 12 November 2021

Armenia is often referred to as the "country of stones". Stones create the local landscape, and stones have also inspired masters to create unique and magnificent architectural masterpieces. Buildings are perfectly adapted to the surrounding nature, one can see it in the case of Noravank Monastery situated in the south-western part of Armenia near the settlement of Yeghegnadzor. This monastery complex was founded at the beginning of the 13th century and now stands on the edge of a cliff in a twisted gorge with steep red rock formations. Two main temples, Surb Astvatsatsin and Surb Karapet churches, both repeatedly suffered in earthquakes but were eventually reconstructed in all their splendour. 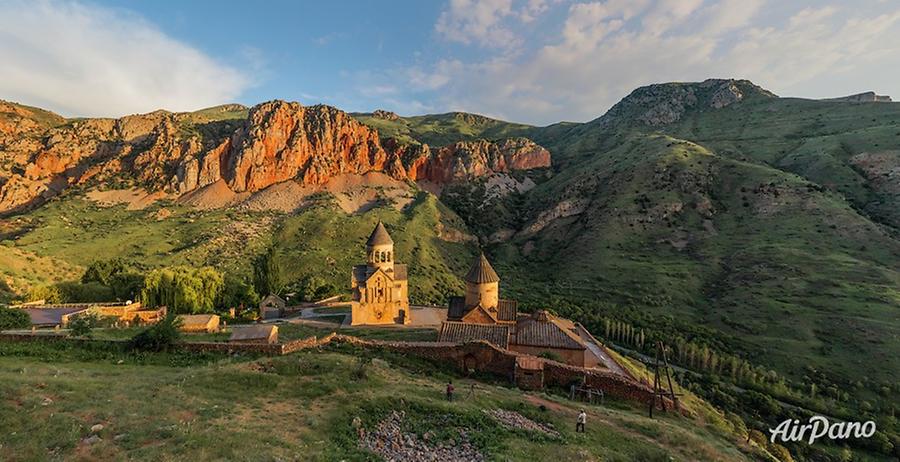 Armenia
© AirPano
Tatev Monastery was built on a cliff, as well, but considerably earlier — at the end of the 9th or beginning of the 10th century, in the waning days of the Arab rule. Poghos and Petros church bore witness to the revived Armenian kingdom. Within its walls, there is also the tomb of Grigor Tatevatsi: the last canonized saint of the Armenian Apostolic Church. 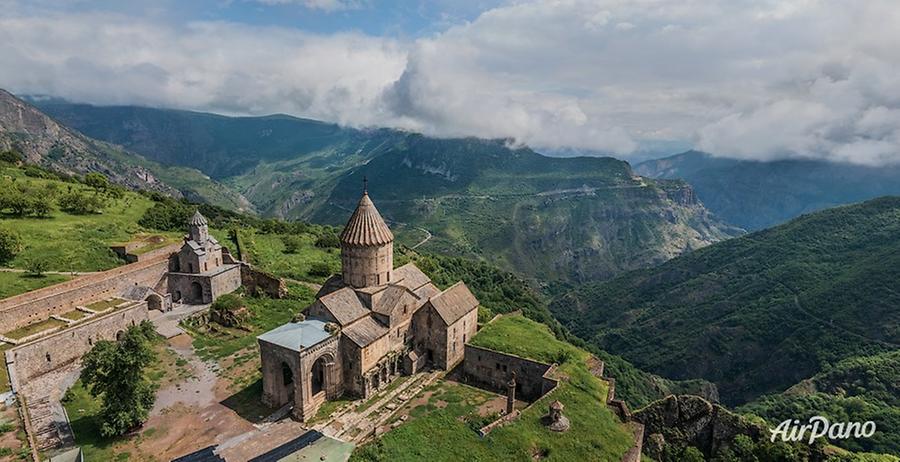 When the terrain does not allow the construction of the houses, there is another way to create dwellings! An example is the cave settlement of Old Khndzoresk in the Goris Municipality in the southern part of the country. As early as by the 13th century, a whole network of "apartments" had appeared inside the rocks with picturesque terraces and lush gardens located nearby. Until the middle of the 20th century, people lived here but afterwards, the city was deserted and has remained a monument to the ingenuity and skill of the ancient inhabitants of this mountainous region.

One can admire Old Khndzoresk from another perspective while standing on an unusual bridge. This is a completely new landmark: in 2012, it was built by one of the local businessmen in memory of his parents. The swinging bridge Khndzoresk with a length of 120 meters connects two slopes of the gorge at a height of 63 meters. Although the structure looks fragile and airy, it can handle 700 people at a time. And another fascinating place in this area is the stone pyramids and pillars. Somehow, they did not come up with a name but in Armenia, they are well known as "nameless stone sculptures of Goris". The hill seems to bristle up, exposing the needles out — such an amazing sight! 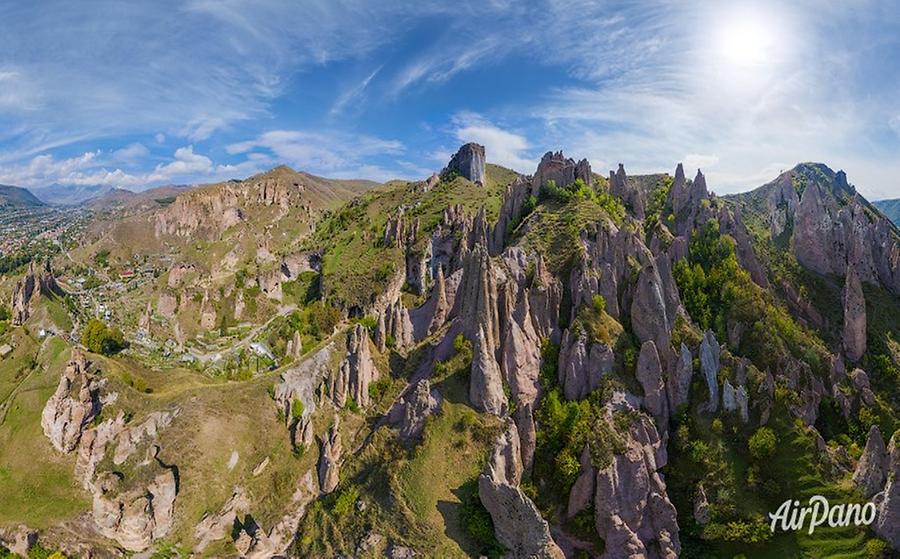 In this part of the country, there is also the site of the "Army of Stones", Carahunge (also called Zorats Karer). That's how the name of this ancient site, lying at the altitude of 1,779 meters, is derived from Armenian words. Another name for this monument is the "speaking stones". In the Bronze Age, there was a settlement nearby, but scientists still argue about the age and purpose of the mysterious circle.

There are also a lot of clean mountain springs and waterfalls in Armenia. One of them is Jermuk, falling along the slopes of the Vardenis mountain range. With its height of 68 meters, it is the second-highest waterfall in the country. It is a national natural monument, and not just because of its beauty but of its springs producing high-quality mineral water.

Nearby, the waters of the Arpa River flow along 128 km. Noravank Monastery is located in one of its numerous gorges! This whole area is exceptionally picturesque, and especially in the Jermuk region. And the most famous aquatic wealth of the country is Lake Sevan. 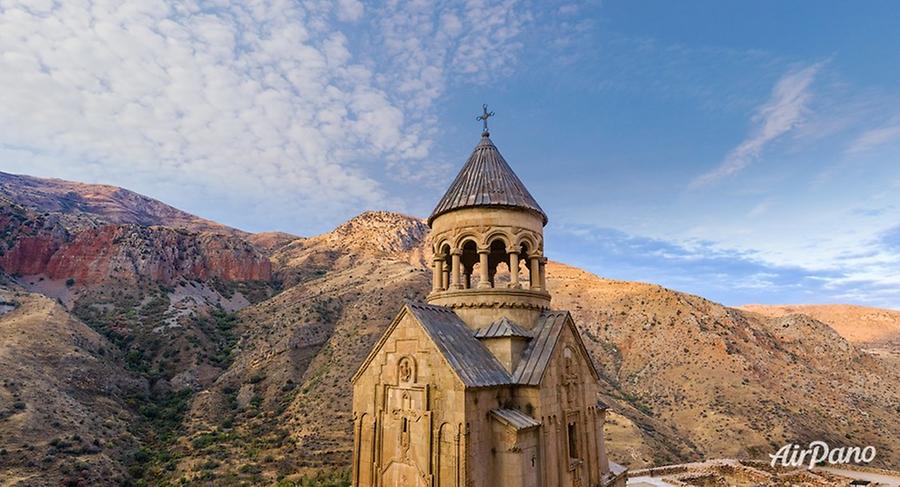 It covers an area of 1,240 square kilometres at an altitude of 1,900 meters and is surrounded by mountain ranges. Its coastal relief is diverse: it is covered with forests, and white stone cliffs, and mountain steppes, and wild pebble beaches. The major man-made attraction is the Sevanavank monastery on the northwestern coast. It was built on a small island in 874, and is now located on a peninsula: when the water level fell, an isthmus appeared here. The monastery went through hard times and was destroyed several times but, in the 20th century, it was partially restored. Now it is a functioning monastery with two magnificent temples. 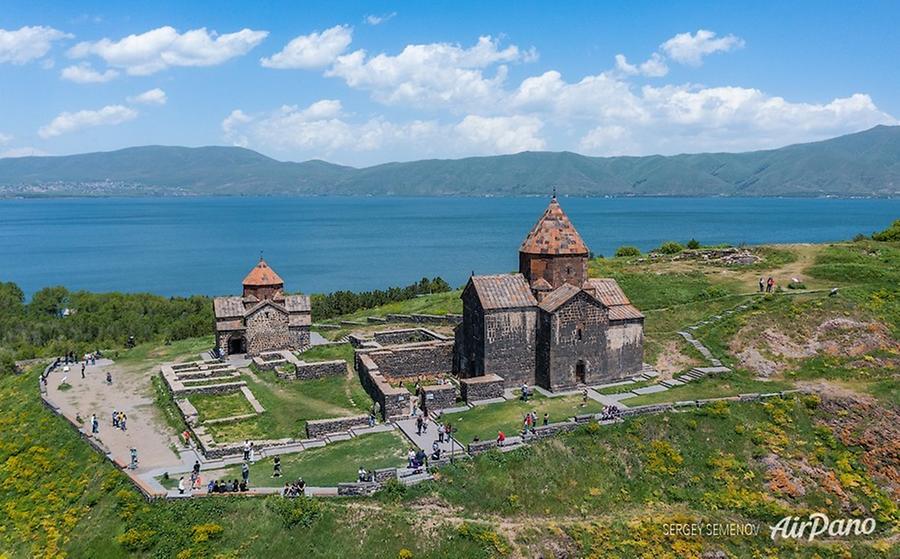 There are several medieval cemeteries on the shore of Sevan. This is not just a tribute to the memory of ancestors: it is also a pearl of Armenian cultural heritage. Burial steles are called "khachkars: sacred items specific to Armenia. Their name translates as "cross in the stone". Each khachkar is decorated with unique crafty patterns. All the monuments of Armenia do not resemble each other. They are different but, at the same time, they are united by belonging to the history of this great country. We hope you enjoyed your AirPano photo journey to these places!