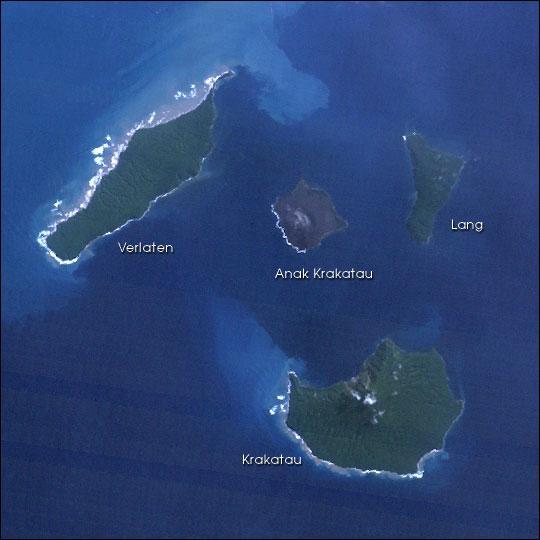 Image courtesy of NASA., under PD
Nestled between the large Indonesian islands of Java and Sumatra is the Krakatau Volcano National Park. In the 4th century, a single marine volcano stood at this site, but in A.D. 416, the caldera of the volcano collapsed.

The remnants formed a new caldera around 7 km (4 mi) in diameter, with the peaks remnants becoming the three islands of Verlaten, Lang, and Krakatau (formerly known as Krakatoa).

This volcano remnant was not dormant, however, and in August 1883 the volcano on Krakatau erupted with such violence that the sound was heard as far away as Madagscar and Alice Springs (central Australia), thousands of kilometers away. Two-thirds of the island was destroyed and roughly 20 cu km of rock was lofted into the atmosphere. It was one of the largest explosions on Earth in recorded history.

The eruption also raised a tsunami 40 m (130 ft) high which resulted in an estimated 36,000 deaths when it washed ashore as much as 10 km inland from the coast of nearby islands. Since 1927, continued eruptions and outflow material has formed the fourth island in the park, Anak Krakatau - "Child of Krakatau."