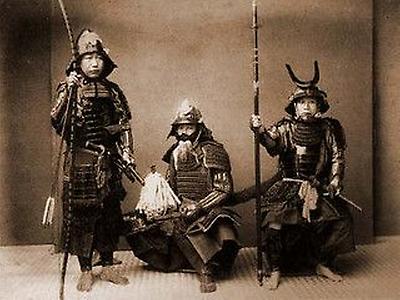 Foto under CC license from Flickr
Copyright Txarli San
“Samurai” is a word to describe a Japanese traditional warrior that existed in Japan for a very long time till the end of Edo period.

Samurai also meant a social class of official warriors serving for a noble family, a local state or Shogunate.

As aristocracy in Middle Ages collapsed, groups of warriors, who had originally served for a noble family, gradually gained their own power, and this led to the Period of Warring States in Japan (ca. 1467 – ca. 1603). During this period, the time of social and political upheaval caused by never-ending military conflicts, a powerful clan employing capable worriers came to lead a small state. The group of samurais with its hierarchical structure governed the territory of the state with its independent ruling power.

Although the highest rank samurais fought in a gorgeous armor with a fashionable warrior helmet riding a horse during the actual battles, lowest rank samurais just followed their seniors on foot, carrying heavy spears and labara (and sometimes, guns too) to fight the enemies. However, the unique feature of this period was that even a lower rank samurai was able to win the leadership of the clan if he had talented communication ability, political power and armed might.

After the unification of Japan in 1603, samurai became a kind of a clerk or a civil servant employed by Tokugawa Shogunate or one of the local states and they seldom had an opportunity to fight, though they always wore “katana,” a Japanese sword. This was also true of a “ronin,” a man who failed in obtaining the position of an official samurai. Even a ronin was often considered to belong to the samurai class in a broader sense or a “bushi” (warrior).

It should be noted that at any time in the history, “katana” was an essential weapon for a samurai and remained a symbol of the samurai class.