Caves and whimsical rocks of Cappadocia are not the only tourist attraction of the region. Travelers are also attracted by the opportunity to admire local landscape from a basket of a hot air balloon. There are a large number of companies who organize hot air balloon rides in the valley, and so prices are rather competitive. Dima and I couldn't miss such an opportunity and so we booked our flight right away.

Usually hot air balloons launch before the sunrise. We spent our first morning shooting with our RC helicopter, and not from a hot air balloon. We watched hundreds of them ascending simultaneously from different corners of the valley. What a spectacular sight! Even when viewed from the ground, not from air... Well, you will see it for yourself when you take a look at our today's virtual tour. 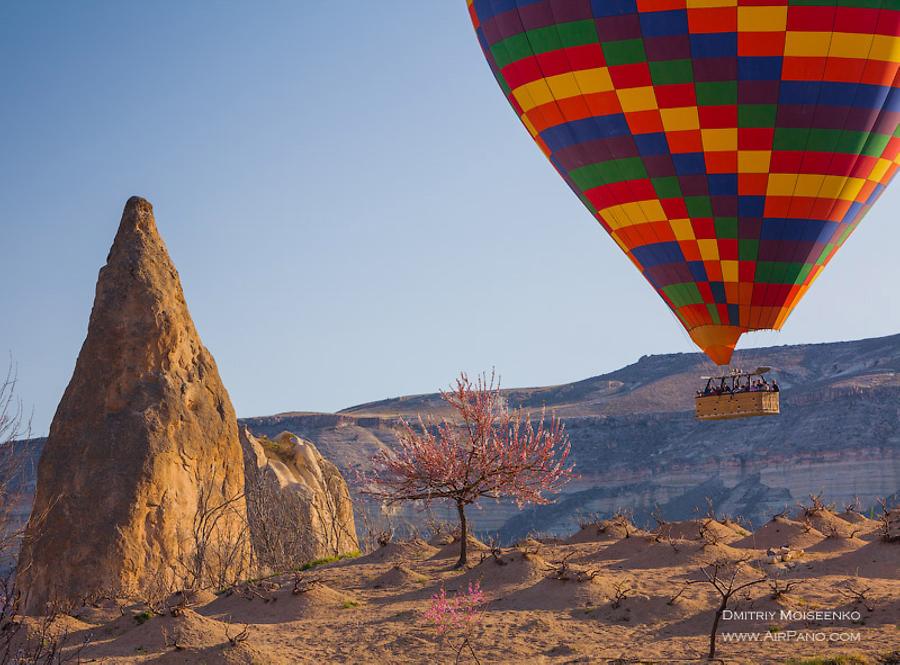 Second hot air balloon launch usually happens at dusk, if the weather allows. That day the weather was acceptable. On our way back to the hotel we noticed a group of people preparing several hot air balloons for take-off. Our flight was scheduled for next morning, but the desire to go up in the air took over. There was a room for us in one of the baskets, so after a short negotiation with a manager we joined the group in their pre-flight instructions.

For me, it was the second hot air balloon fight in my life. My first one was in Myanmar, when we shot Bagan Valley, and I remembered it as a pleasant and fun adventure. The second flight could have been my last... 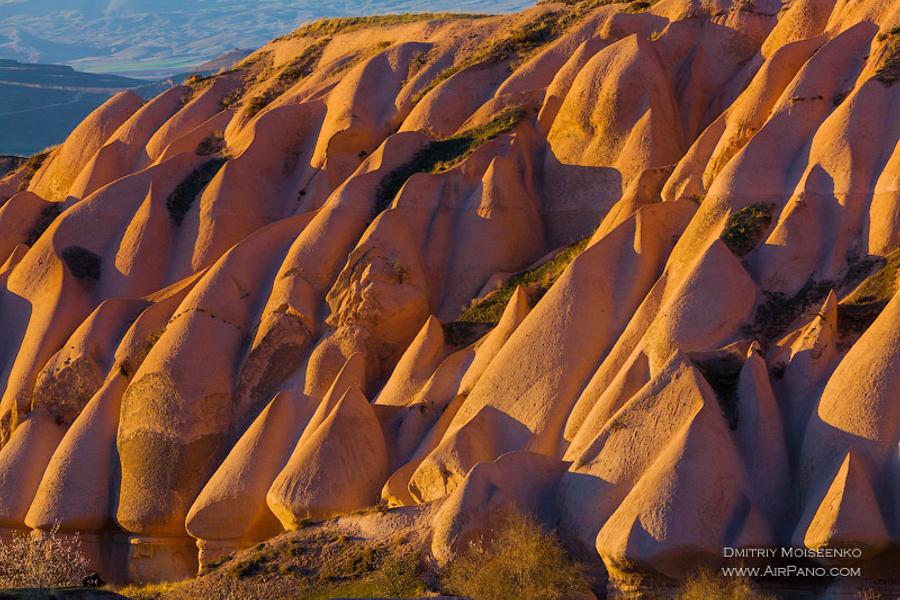 Troubles started during the launch. The wind got stronger during take-off. Instead of a slow ascend, our basket flew for a few meters and hit the ground really hard. Our pilot immediately turned on all the burners and the balloon, finally, took off. However there was a new problem: the wind carried us right towards a nearby tree. Tourists in the center of the basket screamed out of fear. We couldn't avoid the collision, but luckily tree branches hit walls of the basket not damaging the surface of our hot air balloon.

There were no other surprises during ascend. However, we noticed very soon that all key landmarks of the beautiful valley were far away from our rout. I asked our pilot, what was the matter. He said that apparently we were taken by a strong airflow and that he couldn't get us out of it. In about half an hour the pilot told passengers to get ready for landing, warning us that it'd be a hard one. Landing instructions required that a passenger should get down to the basket floor, and secure himself really well by holding a rope and pushing his feet to the inner wall of the basket. 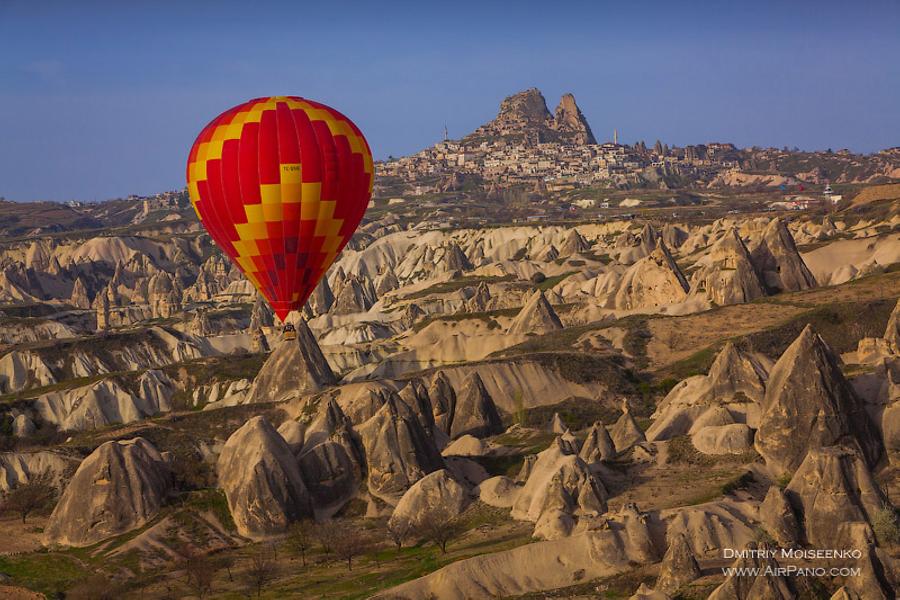 We hit the ground really hard. Then we hit it again. Then our basket got turned over and dragged into a field. That was very unpleasant. Finally our pilot managed to lower the balloon and the dragging stopped. We started climbing out of the basket slowly recovering from shock.

Majority of passengers were elderly Japanese tourists. It might have been poor translation of pre-flight instructions or perhaps they simply ignored our captain, but as a result one of the ladies ended up with multiple broken bones: she was thrown out of the basket during landing because she didn't secure herself well enough.

The lady was taken to a hospital; and the following day almost half of the hot air balloon operators cancelled their flights due to the strong wind. However, our booking was confirmed the night before our flight, and we decided to take our chance again. 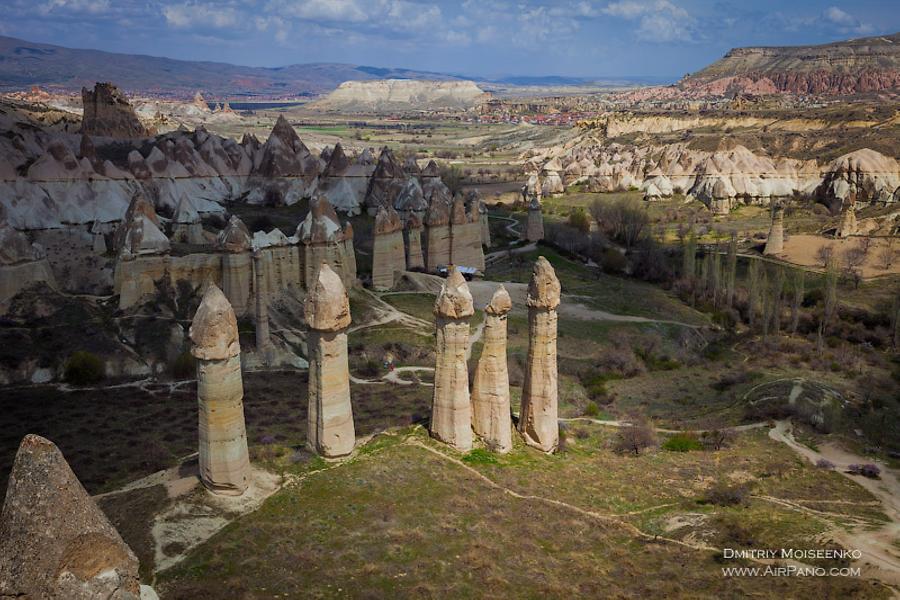 Early next morning we stood at a small launch field few kilometers away from our hotel. Ground crew members were running back and forth preparing balloons for takeoff. Our group met the captain, a big middle-age man. When main pre-flight instructions were over, Dima and I approached our captain asking permission to shoot panoramas form the basket during our flight. At first our captain didn't look too enthusiastic about our idea, but then suddenly he asked:

"Didn't you fly an RC helicopter over Bagan temples in Myanmar a couple of months ago?"

"Ah, crazy Russians! I saw you there! I will let you shoot from the basket"

What a coincidence! There were only 6 hot air balloon pilots in Myanmar, and there are over hundred pilots in Cappadocia. We were lucky to run into the one who saw us at work at the opposite side of the world!

Our second flight was much more interesting than the first one. Dima and I shot a short video about our tour above the valley.

However the landing was hard again due to the strong wind. Our captain warned passengers to be prepared for a strong impact. Everyone held really tight so there were no casualties. Following an old aeronaut tradition we all had a glass of Champaign at the landing site.

And now let me share few interesting facts about Cappadocia.

One of historical regions of Turkey is called "Cappadocia" which means "the land of beautiful horses". This is where ancient Persians bred horses for the cavalry of the Persian king Darius I. 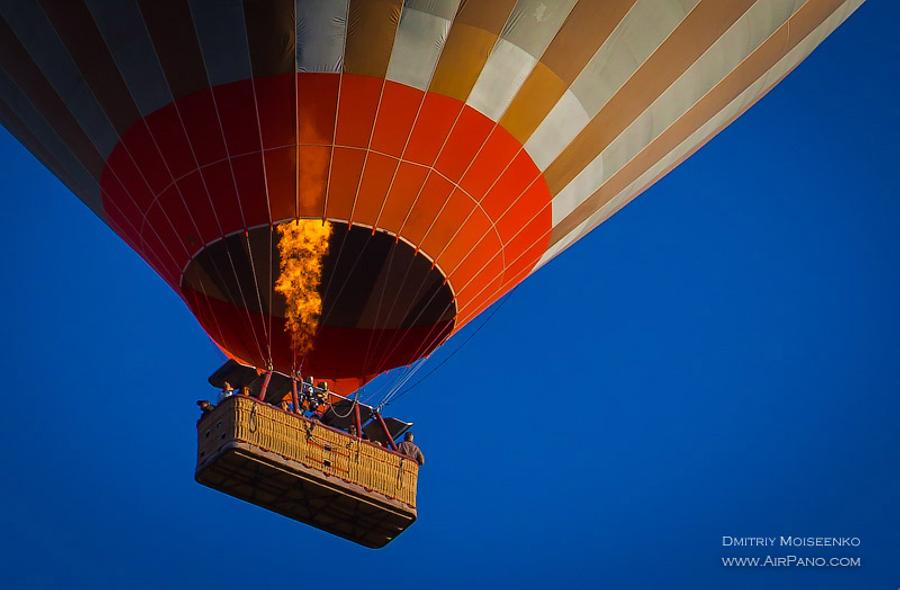 Cappadocia lies on Anatolia plateau about 1000 meter above the sea level, in the center of the country. This region is famous for a number of truly unique landmarks of Turkey. There are fantastic volcanic landscapes, ancient underground cities, and rock monasteries. Göreme National Park and caves of Cappadocia rightfully became a part of UNESCO World Heritage.

Cappadocia are known from ancient times. During I century AD, Christians had to flee from persecution, and Cappadocia proofed to be the best "hiding" place: first Christian communities carved their settlements, churches, and entire cities in the soft sandstone of local mountains.

In 1963 archeologists found one of the rock cities, Derinkuyu. Total length of its residential quarters, storage rooms, underground galleries, and tunnels exceeded 30 kilometers. The entire space was seven stores (85 meters) deep and could accommodate up to 20 thousand people... At nightfall Cappadocian Christians retreated to their carved settlements and lit torches. Looking at the rocks mysteriously glowing from the inside, local people called this area "the land of fairies" thinking of magical creatures and not Christians who lived in the mountains.

Several original settlements survived till modern days. Moreover, there are over five hundred churches, where Apostles Peter and Paul preached, according to the legend. Today the part of Cappadocia stretched between cities of Nevsehir, Ürgüp, and Avanos is a territory of national park and open-air museum called "Göreme". 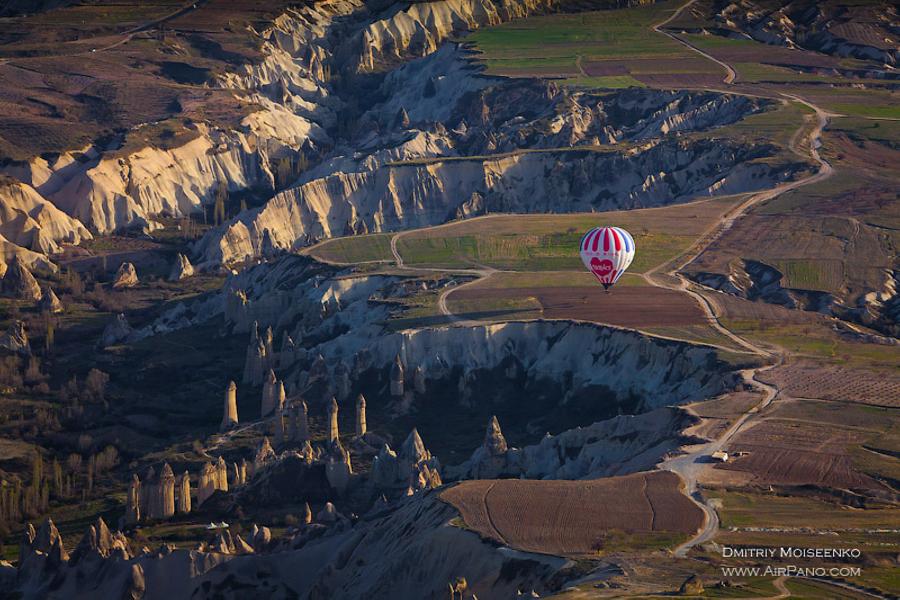 Besides hidden under ground landmarks, Cappadocia is famous for its beautiful areas located on the surface. The landscape formation took over 60 million years. Continuous efforts of opposing natural forces led to volcanic eruptions that covered the land with tuffs and other geological phenomena before the period of erosion started.

Then continental climate with sudden and drastic temperature fluctuations came into the picture racking rocks and weathering out everything that Mother Nature considered «unnecessary». Water finished the job; and as a result we have got famous stone pillars resembling mushrooms, cones, and pyramids of most whimsical shapes. 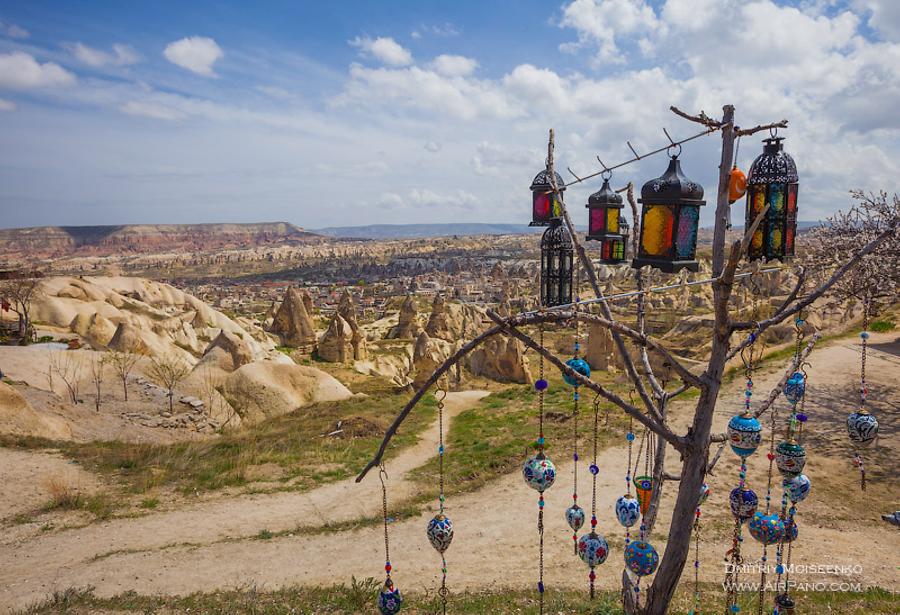 It is said that the extraterrestrial look of Cappadocia landscape inspired George Lucas to create the desert planet Tatooine for the «Star Wars Episode IV: A New Hope» epic movie. Although they didn't shoot the film here, Cappadocia is still a truly amazing place. Cappadocia is often referred to as «the Lost World» and «the Land of Lunar Landscapes». During peak season dozens of hot air balloons raise above Cappadocia to let visitors enjoy the view of the Turkish landmark from the air.

Our virtual tour consisting of spherical aerial panoramas will give you the same (or even better) opportunity. Welcome aboard!