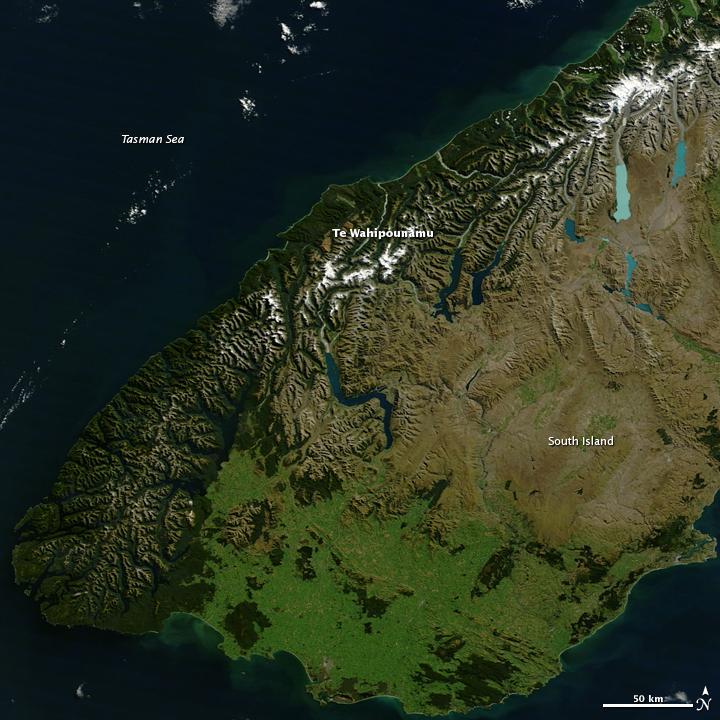 Image courtesy of NASA., under PD
Te Wahipounamu, "the greenstone waters," is a sacred place in the Maori culture of New Zealand. The foreboding mountains and steep-walled valleys on New Zealands southwest coast are the places of Atua, "the gods."

Additionally, the streams that wash down from the glacier-capped peaks carry a highly prized stone, a hard, translucent, green rock that the Maori carved into jewelry and blades, for both tools and weapons. Most New Zealand greenstone is nephrite - a form of jade - though some is bowenite, another mineral.

From space, the west coast of New Zealand resembles the greenstone for which it is named. Dark green native forest extends from the mountain tree line to the shore. The forest harbors unique and endangered animals like the kiwi and takahe, both flightless birds, and the kea, the only alpine parrot.

The lighter green land in the southeast was once forested, but is now grassland or agriculture. Te Wahipounamu is wilderness, and New Zealand has set the land aside to conserve it. The entire 2.6 million ha (6.4 million acres) that make up the southwest coast of the South Island (about 10 percent of New Zealands land area) is divided between four national parks, state forests, and other conservation areas.

The natural and cultural significance of Te Wahipounamu led UNESCO to declare it a World Heritage area in 1990.