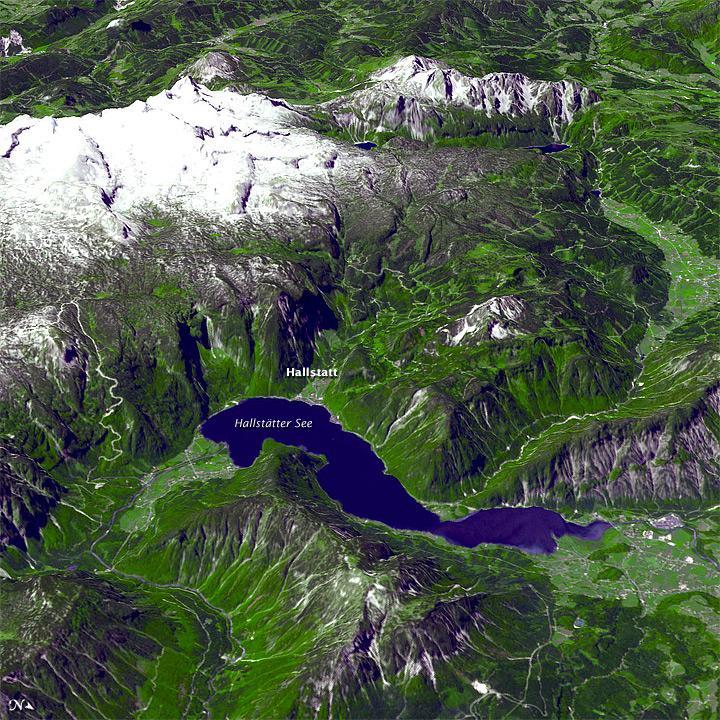 Image courtesy of NASA., under PD
The Alps form a great crescent-shaped ridge extending from the Mediterranean to Austria. Toward the eastern end of this mountain range lies an Austrian resort area known as the Salzkammergut, where towering peaks alternate with narrow valleys and serpentine lakes.

This perspective view of a section of the Salzkammergut was acquired by NASAs Terra satellite on 22 June 2003; it was then draped over an ASTER digital elevation model (DEM). This view looks toward the west, with north toward the lower right. Vegetation is bright green, rock is purple-gray, water is blue, and snow and ice are white.

Settlements dot the well-vegetated valleys, but mountains dominate the landscape. Human activity in this region dates back to the Bronze Age (2nd millennium B.C.). Settlers used high pastures for sheep and cattle grazing, and began the systematic production of salt - particularly in the Hallstadt area.

At first, locals collected natural brine in vessels, and allowed the water to evaporate. Underground salt mining began late in the Bronze Age (8th century B.C.), and continued intermittently through the Middle Ages. The beauty of the landscape combined with the settlements history have made this region a World Heritage Site.