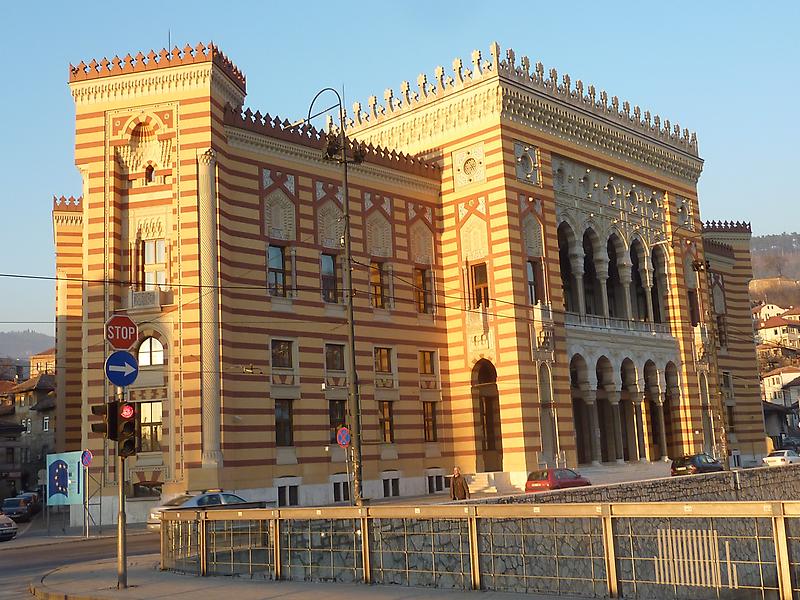 This, the old city hall ( Gradska Vijecnica) is a good place to start a walking visit of the old city that lies in this photo to the left of the building.

The history of the building is quite curious (see the story of the house of spite), so here are just the most important facts. The Habsburgs after annexing Bosnia-Herzegowina tried to mollify the feelings of Sarajevo by building a very beautiful large city hall in neo-Moorish architecture.

This did not work out as planned, since they had to demolish an array of houses dear to the locals. Also, when after two years of construction the building was finnished in 1894 it really did not fit into the surroundings well. (Nor did the beer brewery not far downstream on the other side of the river). Never the less the building was then in use as administrative center (by the Austro-Hungarian governor Joahnn Appel). Indeed, Franz Ferdinand started his fateful trip (that led to his assasination and in a way to WWI) from that very building in June 1914.

During the siege the building, then housing the national libary, was destroyed by mortar fire from the surrounding hills, with 75% of all books destroyed. Today it is lovingly rebuilt and certainly worth a visit.