Chateaux of the Loire Valley 2#

We continue our journey along the Loire Valley. The castles of this region are created in different architectural styles and have different histories, but all of them are truly majestic and significant landmarks of France.

Several castles have a relation to the famous Italian artist Leonardo da Vinci. One of them is Château de Chambord, located 6 kilometres away from the left bank of the Loire river and 14 kilometres to the east of Blois. The construction was carried out between 1519 and 1547, according to the order of Francis I, who wanted to live closer to his beloved lady — Duchess de Thoury. This masterpiece of French Renaissance architecture is one of the most recognizable castles in the country. The name of the architect is not precisely known, but historians have certain suggestions that Leonardo may have taken part in the projecting the castle as at that time he lived and worked at the court of King Francis I. 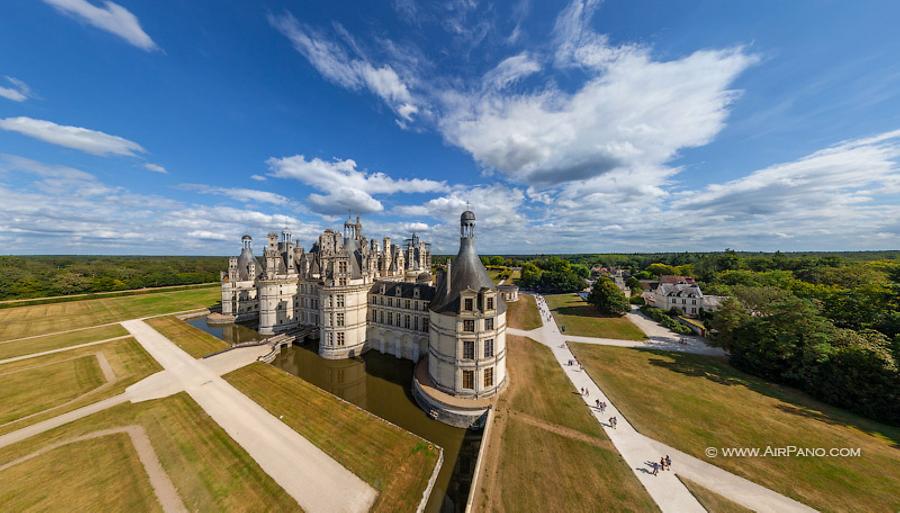 The facade of the building is 156 meters long and 117 meters wide. The plan is arranged around central part of the castle which is called "donjon"; it was not meant to deal with attacks though, but still it was created according to the model of a typical medieval fortified castle. Inside the donjon there are 5 living floors connected by 77 staircases, 426 rooms with 282 fireplaces, and 800 sculptured columns decorating the exterior of the castle. 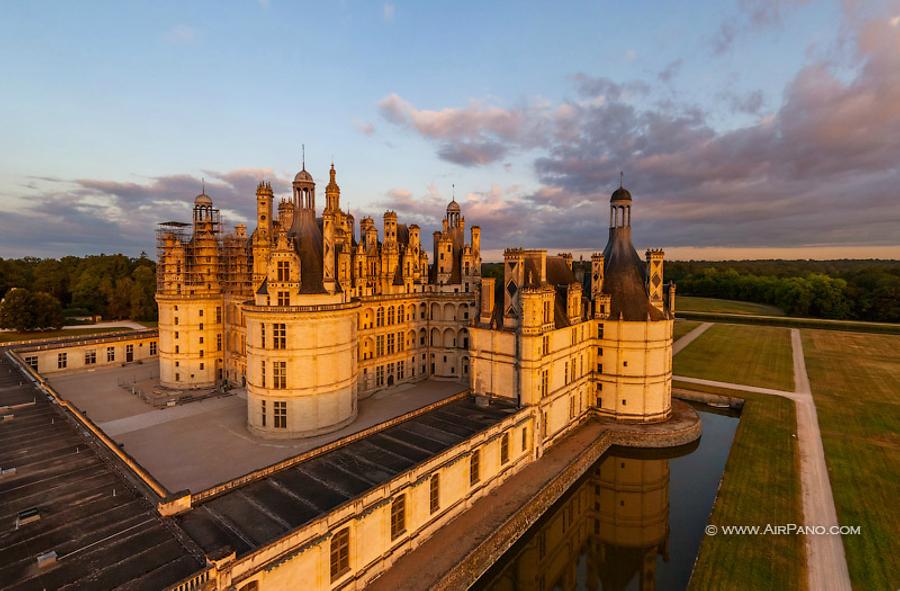 An open double spiral staircase in the central part of the castle is a rather typical feature of Leonardo da Vinci's style. It has two stairs that spirally turn in one direction without meeting each other. Thus descending people can never come in sight with those who go upstairs, and vice versa. This monumental staircase decorated with carvings leads to the upper terrace is also created in Leonardo's style. 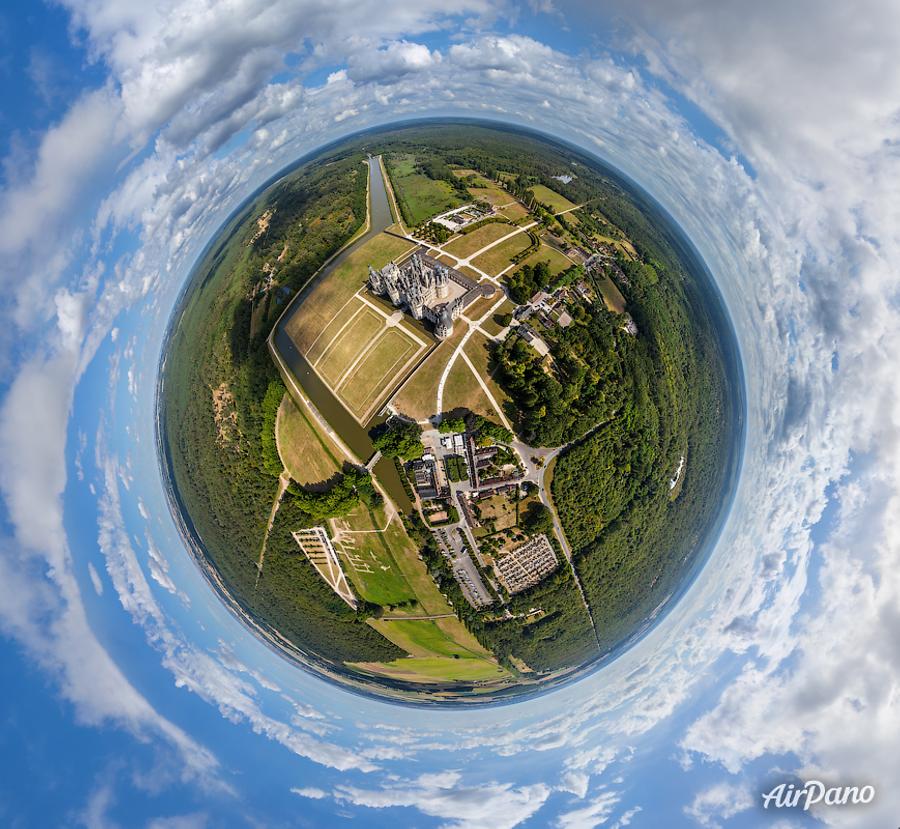 But the Genius of the Renaissance did not live to see it fulfilled: he had passed away several months before the construction of the castle began and was buried in the Château d'Amboise.

In the Middle Ages the mighty family of Amboise owned a fortress and a town, elevating 81 meters above the river and making it possible to control the spur above the Loire. In the 15th century the Château d'Amboise belonged to Duchess Louise of Savoy. Her son, King Francis I, was raised here and spent a lot of time in this castle. As a court architect, Leonardo da Vinci lived and worked in the nearby Clos Lucé, connected to the castle by an underground passage. Clos Lucé is the place where he finished his famous painting of Mona Lisa, and this is where he died in 1519. But the tomb of da Vinci is situated in the chapel of Saint-Hubert, in Amboise.

During the French Revolution, the significant part of the castle was demolished. In order to stop the process of devastation, in 1872 the Third Republic entrusted the remnants of the castle to the House of Orléans. Nowadays the Château d'Amboise, being significantly rebuilt in comparison to the initial project, is under the protection of the Foundation Saint-Louis headed by the Comte de Paris.

The name of King Francis I is connected, though indirectly, to one more castle — the Château d'Azay-le-Rideau. The construction began in 1510 above a picturesque curve of the Indre river. It occupies the site of a former feudal castle: in the 12th century it was built by the local seigneur Ridel d'Azay. He was notorious for his cruel nature and gained the name "the Devil's child". In the 15th century that castle, being the property of Duke of Burgundy at that time, fell victim of a battle and was burnt to the ground. And nothing was left even of the village located nearby. Later, a new town appeared here and got the name of Azay-le-Brûlé (literally "the Burnt"). 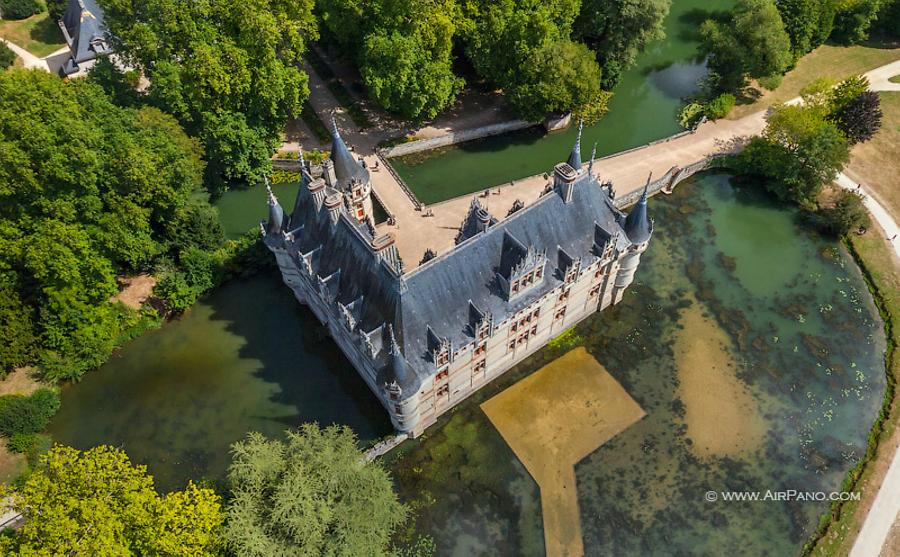 Gilles Berthelot, the local banker and Treasurer-General of the King Francis I finances, received these lands by the right of succession, and between 1510 and 1528 he had the castle built for his wife Philippa. There is a legend that the future castle appeared in her dreams, and exquisite towers and an elegant staircase were created according to her taste. Nowadays the Château d'Azay-le-Rideau is slightly reconstructed, comparing to its initial project, and now it is a good example of both Gothic and Renaissance architecture. 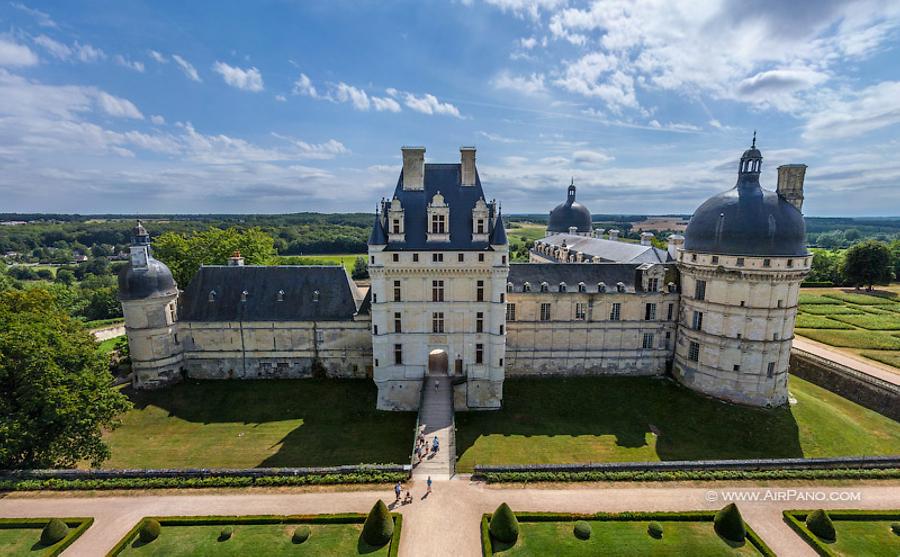 One of the most well-off families of the 16th century — financiers d'Estampes — came to a great idea and fulfilled it: on the site of the demolished 12th century fortress they decided to build a Chambord-like royal castle. Although the construction began in 1540 and was completed only two centuries later. All the elements of the castle are well-balanced.

In 1803 a new rather famous owner came to the Valençay — Charles Maurice de Talleyrand, who worked as a foreign minister at the court of Napoleon Bonaparte. He turned his property into the centre of high-society life, and that was when a theatre appeared here.

In the beginning of the 20th century a park was made here; and during the Second World War the Talleyrands safely sheltered in the castle such treasures of the Louvre as the Winged Victory of Samothrace and the Venus de Milo.

In 1979 the castle came to an association of historic chateaux of France. It is a genuine example of Renaissance architecture and French (Mansart) classicism. To provide interest of tourists the museum of the old autos was opened and some exotic animal, such as llamas and peacocks, are kept in the park.

Our next virtual tour along the Loire Valley will get us acquainted with Richard the Lionheart, a secret royal wedding and intrigues of the French throne.

13 Panoramas of Chateaux of the Loire Valley 2