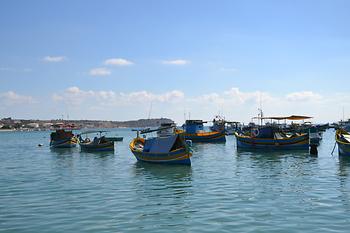 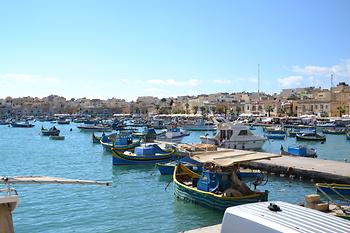 Luzzus, a symbol of Malta, are small, colourfully painted, traditional fishing boats found in the Maltese archipelago since antiquity. The strange sounding name derives from the Italian word "guzzo" which means a boat used for fishing or transport common in Italy and Sicily.

It is believed that these sturdy little boats were even used in Phoenician times. Their special design with its double-ended hull is quite stable and solid, even if the weather is not quite favourable. A small concession to modernity was made as nowadays almost all Luzzus have an engine on board. Formerly they were sailing vessels. 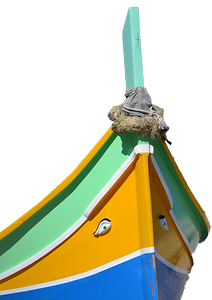 Their design hasn't changed much over time. As often as not you can recognize them by their colours as they are painted yellow, orange, red, green and blue which is not really what one would expect from a fishing boat. Often they have Christian names even though an Eye of Horus graces the bow. The Eye of Horus is an old Egyptian hieroglyph. Horus, according to Egyptian mythology, is the son of Isis and Osiris and is known as the god of heaven and the sun. The hieroglyph is also found on old Egyptian boats and should bring good luck to the fishermen. Furthermore it should protect vessels on high seas and symbolizes vigilance against dangers of the deep.

Marsaxlokk Marsaxlokk, Malta , a town on the east side of Malta, is famous for its multitude of Luzzus. Most of them are still fishing boats, even though some were modified to carry tourists.