by Dmitry Moiseenko and Stas Sedov, members of the AirPano Team that is a member of the global-geography Consortium.

Windmills were invented a long time ago, and for quite a long period of time it was the only mechanism used by people. In the 19th century windmills were eventually replaced by the newly developed steam engines. This happened in many countries except Holland. And the reason for it is was the location of the country.

To begin with, the name "Holland" is not quite correct for this country: North and South Holland are only two of the state's twelve provinces. These two regions were economically and technically more developed than the others, that's why the name became widely known outside the country. But the official name of the state — "Netherlands" — literally means "lower countries": a reminder that people started inhabiting this area in the low river deltas. About half of the territory, which is occupied by around 60% of the country's population, lies below the sea level; around one third of the territory is not higher than one meter above sea level. Approximately 10% of the land has been reclaimed from the sea and lakes, and windmills played an important part in this process. 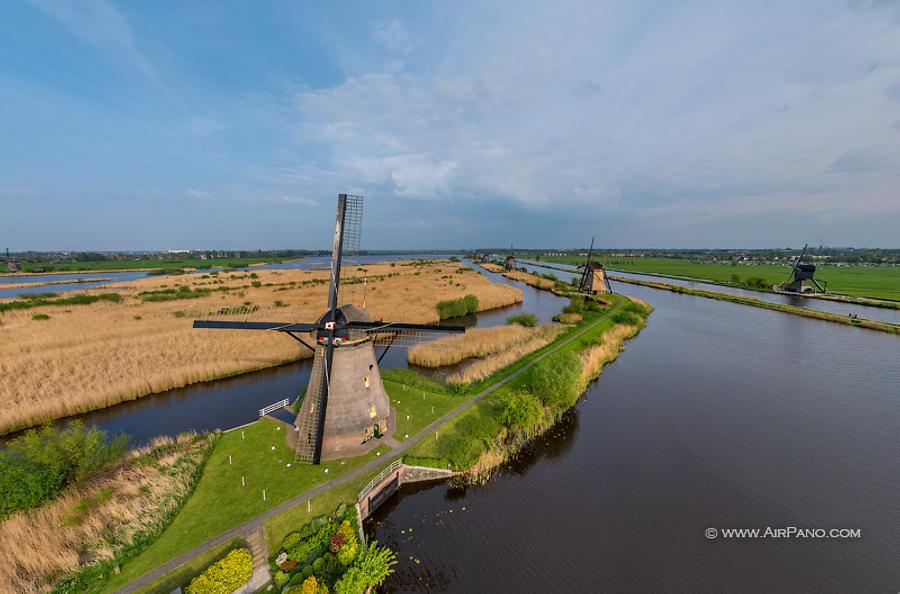 While reclaiming the lands from the water, the Dutchmen built the system of the parallel channels and the windmills pumped water outside the causeway that surrounded the drained area. It was also very important for the reclaimed lands (polders) to stay dry. For this purpose, special windmills were developed: they could pump water and keep it in the inner pool on the sublevel between the level of polders and the water level in rivers. 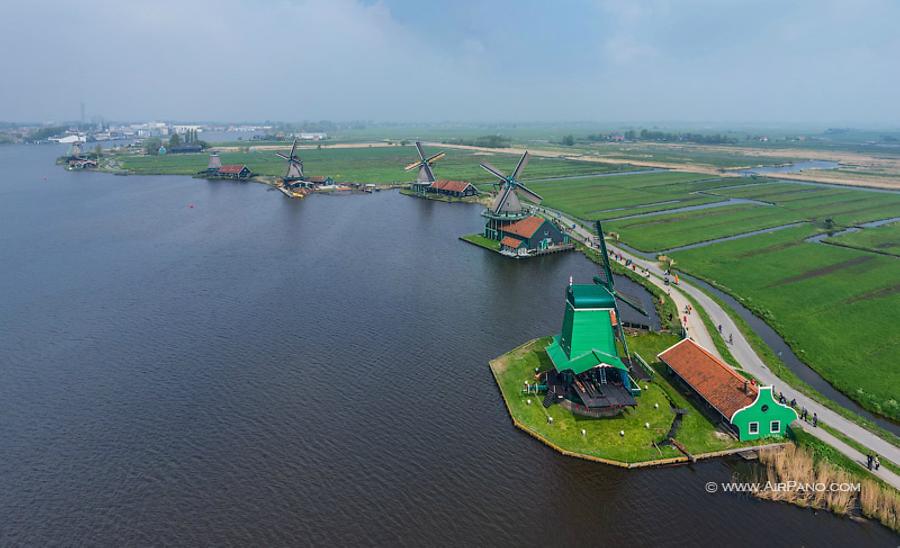 Nowadays the water level is controlled automatically with the help of modern techniques and pumping stations, but before the development of such modern technologies every village had a windmill. At that time Holland was called "the country of 10,000 windmills". By now their number has lessened to 1,000, but still it is more than in any other country. There is no other use of them but to become a historical heritage.

Among the villages known for having windmills there is Zaanse Schans located in the northern part of the country. They say that Napoleon, who happened to visit this place, described this village as "one of a kind". Now there is a museum in the open air with a collection of well-preserved windmills and ancient wooden houses dated the 17th-18th centuries. 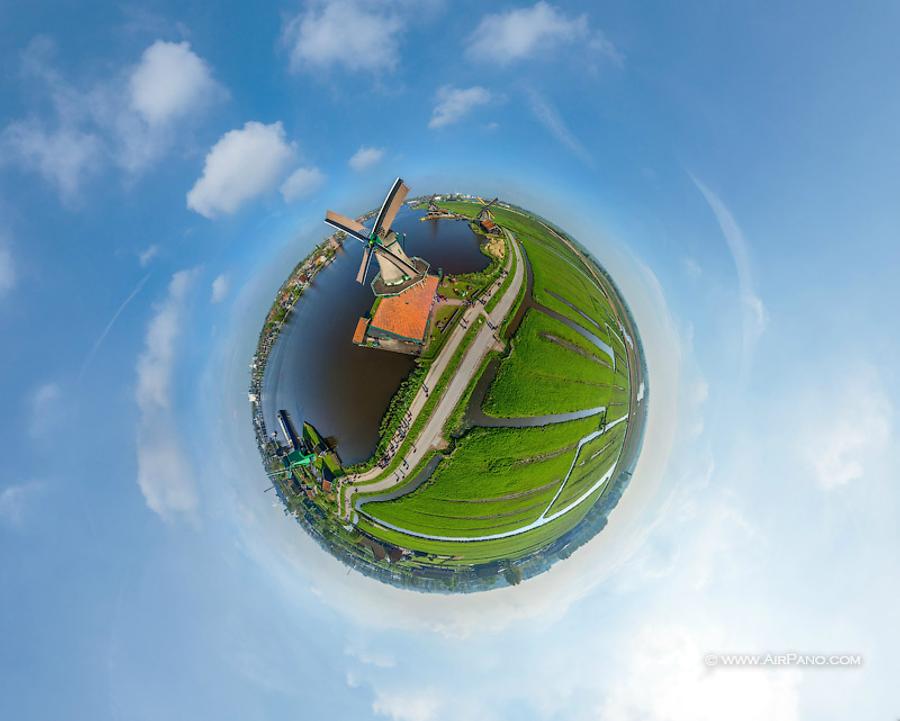 Kinderdijk village, belonging to the province South Holland and situated at the confluence of the Lek and Noord rivers, is not of the less interest. In order to drain the polder, a system of 19 windmills was built in 1740 and now this group of mills is the largest concentration of old windmills in the whole country. In 1997 this complex became a UNESCO World Heritage Site. Despite all the knowledge and draining technologies created by the Dutch, the water still was a problem and there was no way for them to take complete control over it. Kinderdijk, as many other villages in Holland, continuously suffered floods and damaged causeways. 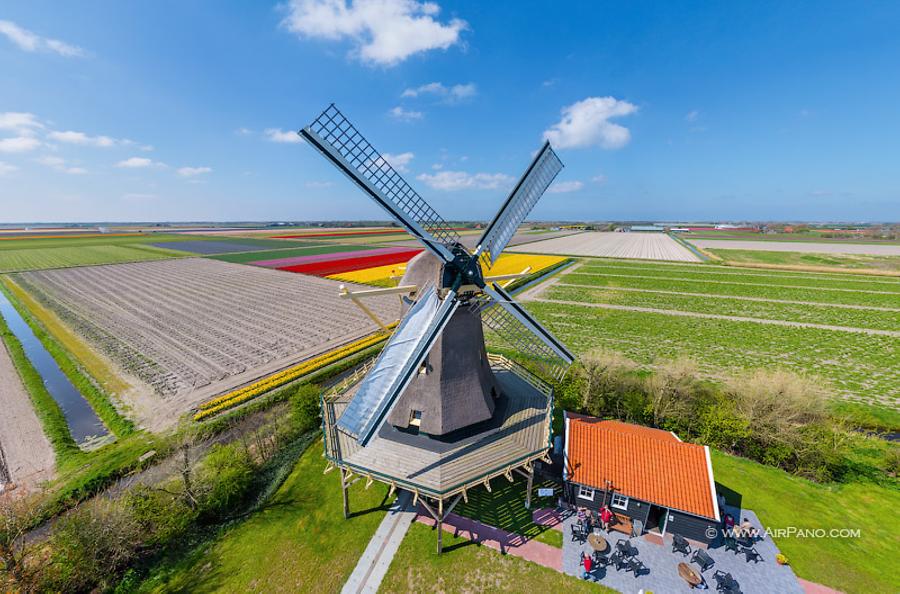 In the same province there is the city of Schiedam with five remaining windmills: having the height of around 40 meters, they are the highest mills in the world. In 2006 a modern wind turbine, which actually looks like a traditional windmill, was built here.

By the way, the first wind turbines producing electricity were created in the 19th century in Denmark; as for Holland, at that period of time this country was occupied with the draining problem. But now wind turbines are more commonly used here: as of the year 2014, the Netherlands was the 17th country in the world in the amount of the wind-produced energy. 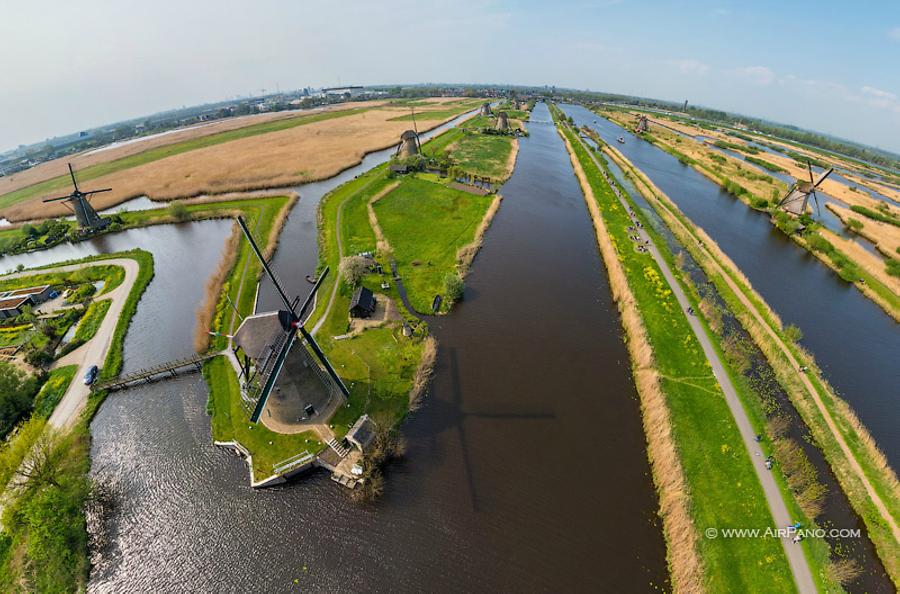 The windmills are not used in the way they were designed anymore, but they are not forgotten. The second Saturday of May is the National Mill Day in the Netherlands. On that day more than 600 windmills open their doors to visitors and millers show and share their skills. As for us, we don't have to wait a special day to get better acquainted with the most interesting part of Holland's history: all you have to do is open our panoramas and begin the tour.