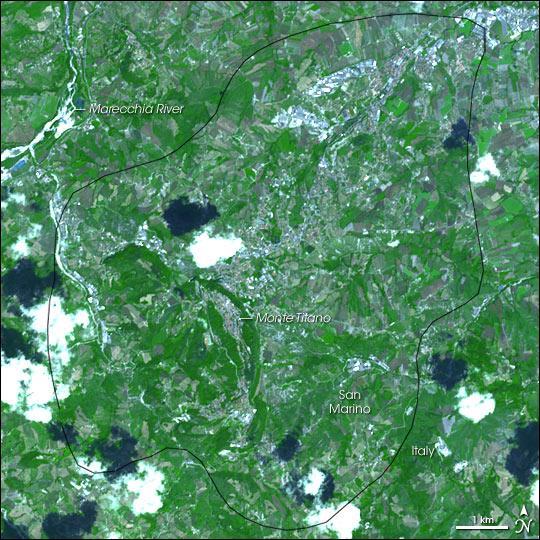 Image courtesy of NASA., under PD
With an area of just 61 sq km (23.5 sq mi), San Marino is the third-smallest country in Europe, behind Monaco and the Holy See. Located in the northern part of the Italian Peninsula, near the Adriatic Sea, this tiny nation is surrounded by Italy.

The Apennine Mountains give the region a rough terrain, and the limestone Monte Titano dominates the area, with a fort perched on each of the mountains three summits. According to legend, San Marino is the worlds oldest surviving republic, dating back to 301. The original city sits atop Monte Titano. Today, however, development has spread throughout the republic, evidenced by the many areas of blue-gray and the meandering roads.

Tourism has brought prosperity to this small republic, but historically, its rugged terrain and lack of wealth may have helped it escape the unwanted attention of potential invaders.