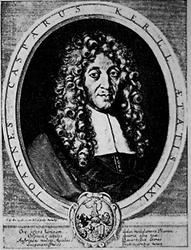 During his lifetime, Johann Kaspar Kerll (1627 Adorf/Saxony - 1693 Munich/Germany) was a respected organist and composer. Archduke Leopold Wilhelm heard about his talent and invited him to come to Vienna where he studied with the court chapelmaster, Giovanni Valentini, among others. After further studies in Italy, employment in Brussels and Munich, he became imperial court organist in Vienna on the side of Alessandro Poglietti. During his stay in Vienna, he composed the Modulatio organica super Magnificat (1686). The Magnificat on the 2nd tone which is the musical example is included in this publication. The collection consists of a cycle of Versets with a prelude, five fugues and a finale on each of the Magnificat tones. The illustration shows an engraving with a portrait of Kerll. (E. Stadler)