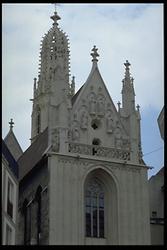 Vinzenz Fux (ca. 1606 Weisskirchen/Styria - 1659 Vienna) was employed as the organist of the church Maria am Gestade in Vienna (Picture) before he joined the chapel of the widowed Empress Eleanora. Fux mainly composed masses and Trio Sonatas (Musical example: Trio Sonata in a minor), which have survived in manuscripts. It is testimony of their high quality that they were even taken at times for works of the later imperial chapelmaster Johann Joseph Fux, who was however not related to Vinzenz Fux. The Trio Sonata in a minor is number 20 in the Rost Codex in Paris. (E. Stadler)