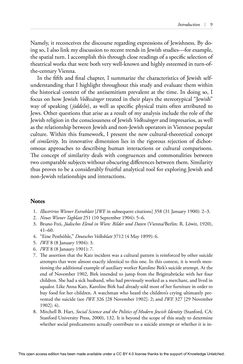 Introduction | 9 Namely, it reconceives the discourse regarding expressions of Jewishness. By do- ing so, I also link my discussion to recent trends in Jewish studies—for example, the spatial turn. I accomplish this through close readings of a speciﬁ c selection of theatrical works that were both very well-known and highly esteemed in turn-of- the-century Vienna. In the ﬁ fth and ﬁ nal chapter, I summarize the characteristics of Jewish self- understanding that I highlight throughout this study and evaluate them within the historical context of the antisemitism prevalent at the time. In doing so, I focus on how Jewish Volkssänger treated in their plays the stereotypical “Jewish” way of speaking (jiddeln), as w ell as speciﬁ c physical traits often attributed to Jews. Other questions that arise as a result of my analysis include the role of the Jewish religion in the consciousness of Jewish Volkssänger and impresarios, as well as the relationship between Jewish and non-Jewish operators in Viennese popular culture. Within this framework, I present the new cultural-theoretical concept of similarity. Its innovative dimension lies in the rigorous rejection of dichot- omous approaches to describing human interactions or cultural comparisons. Th e concept of similarity deals with congruences and commonalities between two comparable subjects without obscuring diﬀ erences between them. Similarity thus proves to be a considerably fruitful analytical tool for exploring Jewish and non-Jewish relationships and interactions. Notes 1. Illustrirtes Wiener Extrablatt [IWE in subsequent citations] 358 (31 January 1900): 2–3. 2. Neues Wiener Tagblatt 251 ( 10 September 1904): 5–6. 3. Bruno Frei, Jüdisches Elend in Wien: Bilder und Daten (Vienna/Berlin: R. Löwit, 1920), 41–60. 4. “Eine Pesthöhle,” Deutsches Volksblatt 3712 (4 May 1899): 6. 5. IWE 8 (8 January 1904): 3. 6. IWE 8 (8 Janaury 1901): 7. 7. Th e assertion that the Katz incident was a cultural pattern is reinforced by other suicide attempts that were almost exactly identical to this one. In this context, it is worth men- tioning the additional example of auxiliary worker Karoline Birk’s suicide attempt. At the end of November 1902, Birk intended to jump from the Brigittabrücke with her four children. She had a sick husband, who had previously worked as a merchant, and lived in squalor. Like Anna Katz, Karoline Birk had already sold most of her furniture in order to buy food for her children. A watchman who heard the children’s crying ultimately pre- vented the suicide (see IWE 326 [28 November 1902]: 2; and IWE 327 [29 November 1902]: 4). 8. Mitchell B. Hart, Social Science and the Politics of Modern Jewish Identity (Stanford, CA: Stanford University Press, 2000), 132. It is beyond the scope of this study to determine whether social predicaments actually contribute to a suicide attempt or whether it is in- This open access edition has been made available under a CC BY 4.0 license thanks to the support of Knowledge Unlatched.
zurück zum  Buch Entangled Entertainers - Jews and Popular Culture in Fin-de-Siècle Vienna"
Entangled Entertainers Jews and Popular Culture in Fin-de-Siècle Vienna