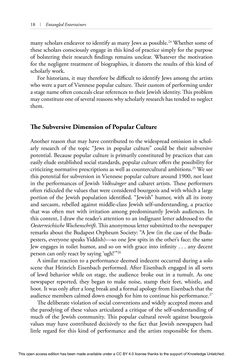 18 | Entangled Entertainers many scholars endeavor to identify as many Jews as possible.24 Whether some of these scholars consciously engage in this kind of practice simply for the purpose of bolstering their research ﬁ ndings remains unclear. Whatever the motivation for the negligent treatment of biographies, it distorts the results of this kind of scholarly work. For historians, it may therefore be diﬃ cult to identify Jews among the artists who were a part of Viennese popular culture. Th eir custom of performing under a stage name often conceals clear references to their Jewish identity. Th is problem may constitute one of several reasons why scholarly research has tended to neglect them. Th e Subversive Dimension of Popular Culture Another reason that may have contributed to the widespread omission in schol- arly research of the topic “Jews in popular culture” could be their subversive potential. Because popular culture is primarily constituted by practices that can easily elude established social standards, popular culture oﬀ ers the possibility for criticizing normative prescriptions as well as countercultural ambitions.25 We see this potential for subversion in Viennese popular culture around 1900, not least in the performances of Jewish Volkssänger and cabaret artists. Th ese performers often ridiculed the values that were considered bourgeois and with which a large portion of the Jewish population identiﬁ ed. “Jewish” humor, with all its irony and sarcasm, rebelled against middle-class Jewish self-understanding, a practice that was often met with irritation among predominantly Jewish audiences. In this context, I draw the reader’s attention to an indignant letter addressed to the Oesterreichische Wochenschrift. Th is anonymous letter submitted to the newspaper remarks about the Budapest Orpheum So ciety: “A Jew (in the case of the Buda- pesters, everyone speaks Yiddish)—so one Jew spits in the other’s face; the same Jew engages in toilet humor, and so on with grace into inﬁ nity . . . any decent person can only react by saying ‘ugh!’”26 A similar reaction to a performance deemed indecent occurred during a solo scene that Heinrich Eisenbach performed. After Eisenbach engaged in all sorts of lewd behavior while on stage, the audience broke out in a tumult. As one newspaper reported, they began to make noise, stamp their feet, whistle, and hoot. It was only after a long break and a formal apology from Eisenbach that the audience members calmed down enough for him to continue his performance.27 Th e deliberate violation of social conventions and widely accepted mores and the parodying of these values articulated a critique of the self-understanding of much of the Jewish community. Th is popular cultural revolt against bourgeois values may have contributed decisively to the fact that Jewish newspapers had little regard for this kind of performance and the artists responsible for them. This open access edition has been made available under a CC BY 4.0 license thanks to the support of Knowledge Unlatched.
zurück zum  Buch Entangled Entertainers - Jews and Popular Culture in Fin-de-Siècle Vienna"
Entangled Entertainers Jews and Popular Culture in Fin-de-Siècle Vienna