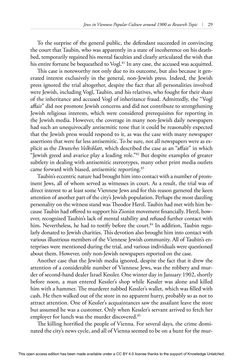 Jews in Viennese Popular Culture around 1900 as Research Topic | 29 To the surprise of the general public, the defendant succeeded in convincing the court that Taubin, who was apparently in a state of incoherence on his death- bed, temporarily regained his mental faculties and clearly articulated the wish that his entire fortune be bequeathed to Vogl.81 In any case, the accused was acquitted. Th is case is noteworthy not only due to its outcome, but also because it gen- erated interest exclusively in the general, non-Jewish press. Indeed, the Jewish press ignored the trial altogether, despite the fact that all personalities involved were Jewish, including Vogl, Taubin, and his relatives, who fought for their share of the inheritance and accused Vogl of inheritance fraud. Admittedly, the “Vogl aﬀ air” did not promote Jewish concerns and did not contribute to strengthening Jewish religious interests, which were considered prerequisites for reporting in the Jewish media. However, the coverage in many non-Jewish daily newspapers had such an unequivocally antisemitic tone that it could be reasonably expected that the Jewish press would respond to it, as was the case with many newspaper assertions that were far less antisemitic. To be sure, not all newspapers were as ex- plicit as the Deutsches Volksblatt, which described the case as an “aﬀ air” in which “Jewish greed and avarice play a leading role.”82 But despite examples of greater subtlety in dealing with antisemitic stereotypes, many other print media outlets came forward with biased, antisemitic reporting.83 Taubin’s eccentric nature had brought him into contact with a number of prom- inent Jews, all of whom served as witnesses in court. As a result, the trial was of direct interest to at least some Viennese Jews and for this reason garnered the keen attention of another part of the city’s Jewish population. Perhaps the most dazzling personality on the witness stand was Th eo dor Herzl. Taubin had met with him be- cause Taubin had oﬀ ered to support his Zionist movement ﬁ nancially. Herzl, how- ever, recognized Taubin’s lack of mental stability and refused further contact with him. Nevertheless, he had to testify before the court.84 In addition, Taubin regu- larly donated to Jewish charities. Th is devotion also brought him into contact with various illustrious members of the Viennese Jewish community. All of Taubin’s en- terprises were mentioned during the trial, and various individuals were questioned about them. However, only non-Jewish newspapers reported on the case. Another case that the Jewish media ignored, despite the fact that it drew the attention of a considerable number of Viennese Jews, was the robbery and mur- der of second-hand dealer Israel Kessler. One winter day in January 1902, shortly before noon, a man entered Kessler’s shop while Kessler was alone and killed him with a hammer. Th e murderer nabbed Kessler’s wallet, which was ﬁ lled with cash. He then walked out of the store in no apparent hurry, probably so as not to attract attention. One of Kessler’s acquaintances saw the assailant leave the store but assumed he was a customer. Only when Kessler’s servant arrived to fetch her employer for lunch was the murder discovered.85 Th e killing horriﬁ ed the people of Vienna. For several days, the crime domi- nated the city’s news cycle, and all of Vienna seemed to be on a hunt for the mur- This open access edition has been made available under a CC BY 4.0 license thanks to the support of Knowledge Unlatched.
zurück zum  Buch Entangled Entertainers - Jews and Popular Culture in Fin-de-Siècle Vienna"
Entangled Entertainers Jews and Popular Culture in Fin-de-Siècle Vienna