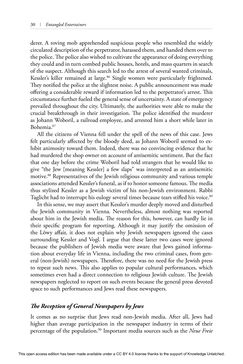 30 | Entangled Entertainers derer. A roving mob apprehended suspicious people who resembled the widely circulated description of the perpetrator, harassed them, and handed them over to the police. Th e police also wished to cultivate the appearance of doing everything they could and in turn combed public houses, hotels, and mass quarters in search of the suspect. Although this search led to the arrest of several wanted criminals, Kessler’s killer remained at large.86 Single women were particularly frightened. Th ey notiﬁ ed the police at the slightest noise. A public announcement was made oﬀ ering a considerable reward if information led to the perpetrator’s arrest. Th is circumstance further fueled the general sense of uncertainty. A state of emergency prevailed throughout the city. Ultimately, the authorities were able to make the crucial breakthrough in their investigation. Th e police identiﬁ ed the murderer as Johann Woboril, a railroad employee, and arrested him a short while later in Bohemia.87 All the citizens of Vienna fell under the spell of the news of this case. Jews felt particularly aﬀ ected by the bloody deed, as Johann Woboril seemed to ex- hibit animosity toward them. Indeed, there was no convincing evidence that he had murdered the shop owner on account of antisemitic sentiment. But the fact that one day before the crime Woboril had told strangers that he would like to give “the Jew [meaning Kessler] a few slaps” was interpreted as an antisemitic motive.88 Representatives of the Jewish religious community and various temple associations attended Kessler’s funeral, as if to honor someone famous. Th e media thus stylized Kessler as a Jewish victim of his non-Jewish environment. Rabbi Taglicht had to interrupt his eulogy several times because tears stiﬂ ed his voice.89 In this sense, we may assert that Kessler’s murder deeply moved and disturbed the Jewish community in Vienna. Nevertheless, almost nothing was reported about him in the Jewish media. Th e reason for this, however, can hardly lie in their speciﬁ c program for reporting. Although it may justify the omission of the Löwy aﬀ air, it does not explain why Jewish newspapers ignored the cases surrounding Kessler and Vogl. I argue that these latter two cases were ignored because the publishers of Jewish media were aware that Jews gained informa- tion about everyday life in Vienna, including the two criminal cases, from gen- eral (non-Jewish) newspapers. Th erefore, there was no need for the Jewish press to repeat such news. Th is also applies to popular cultural performances, which sometimes even had a direct connection to religious Jewish culture. Th e Jewish newspapers neglected to report on such events because the general press devoted space to such performances and Jews read these newspapers. Th e Reception of General Newspapers by Jews It comes as no surprise that Jews read non-Jewish media. After all, Jews had higher than average participation in the newspaper industry in terms of their percentage of the population.90 Important media sources such as the Neue Freie This open access edition has been made available under a CC BY 4.0 license thanks to the support of Knowledge Unlatched.
zurück zum  Buch Entangled Entertainers - Jews and Popular Culture in Fin-de-Siècle Vienna"
Entangled Entertainers Jews and Popular Culture in Fin-de-Siècle Vienna