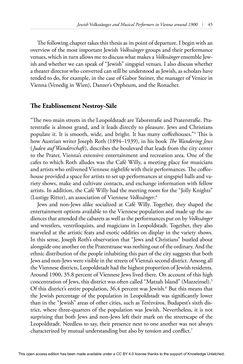 Jewish Volkssänger and Musical Performers in Vienna around 1900 | 45 Th e following chapter takes this thesis as its point of departure. I begin with an overview of the most important Jewish Volkssänger groups and their performance venues, which in turn allows me to discuss what makes a Volkssänger ensemble Jew- ish and whether we can speak of “Jewish” singspiel venues. I also discuss whether a theater director who converted can still be understood as Jewish, as scholars have tended to do, for example, in the case of Gabor Steiner, the manager of Ven ice in Vienna (Venedig in Wien), Danzer’s Orpheum, and the Ronacher. Th e Etablissement Nestroy-Säle “Th e two main streets in the Leopoldstadt are Taborstraße and Praterstraße. Pra- terstraße is almost grand, and it leads directly to pleasure. Jews and Christians populate it. It is smooth, wide, and bright. It has many coﬀ eehouses.”3 Th is is how Austrian writer Joseph Roth (1894–1939), in his book Th e Wandering Jews (Juden auf Wanderschaft), describes the boulevard that leads from the city center to the Prater, Vienna’s extensive entertainment and recreation area. One of the cafes to which Roth alludes was the Café Wi lly, a meeting place for musicians and artists who enlivened Viennese nightlife with their performances. Th e coﬀ ee- house provided a space for artists to set up performances at singspiel halls and va- riety shows, make and cultivate contacts, and exchange information with fellow artists. In addition, the Café Willy had the meeting room for the “Jolly Knights” (Lustige Ritter), an association of Viennese Volkssänger.4 Jews and non-Jews alike socialized at Café Willy. Together, they shaped the entertainment options available to the Viennese population and made up the au- diences that attended the cabarets as well as the performances put on by Volkssänger and wrestlers, ventriloquists, and magicians in Leopoldstadt. Together, they also marveled at the artistic feats and exotic oddities on display in the variety shows. In this sense, Joseph Roth’s observation that “Jews and Christians” bustled about alongside one another on the Praterstrasse was nothing out of the ordinary. And the ethnic distribution of the people inhabiting this part of the city suggests that both Jews and non-Jews were visible in the streets of Vienna’s second district. Among all the Viennese districts, Leopoldstadt had the highest proportion of Jewish residents. Around 1900, 35.8 percent of Viennese Jews lived there. On account of this high concentration of Jews, this district was often called “Matzah Island” (Mazzeinsel).5 Of this district’s entire population, 36.4 percent was Jewish.6 But this means that the Jewish percentage of the population in Leopoldstadt was signiﬁ cantly lower than in the “Jewish” areas of other cities, such as Terézváros, Bud apest’s sixth dis- trict, where three-quarters of the population was Jewish. Nevertheless, it is not surprising that both Jews and non-Jews left their mark on the streetscape of the Leopoldstadt. Needless to say, their presence next to one another was not always characterized by mutual understanding but also by tension and conﬂ ict.7 This open access edition has been made available under a CC BY 4.0 license thanks to the support of Knowledge Unlatched.
zurück zum  Buch Entangled Entertainers - Jews and Popular Culture in Fin-de-Siècle Vienna"
Entangled Entertainers Jews and Popular Culture in Fin-de-Siècle Vienna