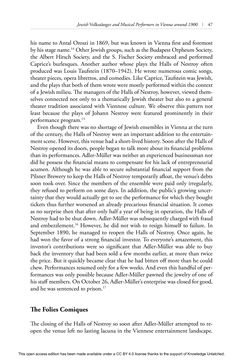 Jewish Volkssänger and Musical Performers in Vienna around 1900 | 47 his n ame to Antal Oroszi in 1869, but was known in Vienna ﬁ rst and foremost by his stage name.14 Other Jewish groups, such as the Budapest Orpheum Society, the Albert Hirsch Society, and the S. Fischer Society embrace d and performed Caprice’s burlesques. Another author whose plays the Halls of Nestroy often produced was Louis Taufstein (1870–1942 ). He wrote numerous comic songs, theater pieces, opera librettos, and comedies. Like Caprice, Taufstein was Jewish, and the plays that both of them wrote were mostly performed within the context of a Jewish milieu. Th e managers of the Halls of Nestroy, however, viewed them- selves connected not only to a thematically Jewish theater but also to a general theater tradition associated with Viennese culture. We observe this pattern not least because the plays of Johann Nestroy were featured prominently in their performance program.15 Even though there was no shortage of Jewish ensembles in Vienna at the turn of the century, the Halls of Nestroy were an important addition to the entertain- ment scene. However, this venue had a short-lived history. Soon after the Halls of Nestroy opened its doors, people began to talk more about its ﬁ nancial problems than its performances. Adler-Müller was neither an experienced businessman nor did he possess the ﬁ nancial means to compensate for his lack of entrepreneurial acumen. Although he was able to secure substantial ﬁ nancial support from the Pilsner Brewery to keep the Halls of Nestroy temporarily aﬂ oat, the venue’s debts soon took over. Since the members of the ensemble were paid only irregularly, they refused to perform on some days. In addition, the public’s growing uncer- tainty that they would actually get to see the performance for which they bought tickets thus further worsened an already precarious ﬁ nancial situation. It comes as no surprise then that after only half a year of being in operation, the Halls of Nestroy had to be shut down. Adler-Müller was subsequently charged with fraud and embezzlement.16 However, he did not wish to resign himself to failure. In September 1890, he managed to reopen the Halls of Nestroy. Once again, he had won the favor of a strong ﬁ nancial investor. To everyone’s amazement, this investor’s contributions were so signiﬁ cant that Adler-Müller was able to buy back the inventory that had been sold a few months earlier, at more than twice the price. But it quickly became clear that he had bitten oﬀ more than he could chew. Performances resumed only for a few weeks. And even this handful of per- formances was only possible because Adler-Müller pawned the jewelry of one of his staﬀ members. On October 26, Adler-Müller’s enterprise was closed for good, and he was sentenced to prison.17 Th e Folies Comiques Th e closing of the Halls of Nestroy so soon after Adler-Müller attempted to re- open the venue left no lasting lacuna in the Viennese entertainment landscape. This open access edition has been made available under a CC BY 4.0 license thanks to the support of Knowledge Unlatched.
zurück zum  Buch Entangled Entertainers - Jews and Popular Culture in Fin-de-Siècle Vienna"
Entangled Entertainers Jews and Popular Culture in Fin-de-Siècle Vienna