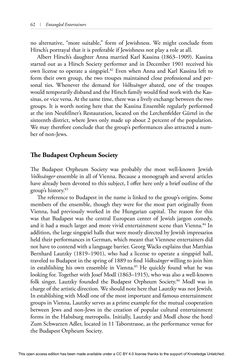 62 | Entangled Entertainers no alternative, “more suitable,” form of Jewishness. We might conclude from Hirsch’s portrayal that it is preferable if Jewishness not play a role at all. Albert Hirsch’s daughter Anna married Karl Kassina (1863–1909). Kassina started out as a Hirsch Society performer and in December 1901 received his own license to operate a singspiel.82 Even when Anna and Karl Kassina left to form their own group, the two troupes maintained close professional and per- sonal ties. Whenever the demand for Volkssänger abated, one of the troupes would temporarily disband and the Hirsch family would ﬁ nd work with the Kas- sinas, or vice versa. At the same time, there was a lively exchange between the two groups. It is worth noting here that the Kassina Ensemble regularly performed at the inn Neufellner’s Restauration, located on the Lerchenfelder Gürtel in the sixteenth district, where Jews only made up about 2 percent of the population. We may therefore conclude that the group’s performances also attracted a num- ber of non-Jews. Th e Budapest Orpheum Society Th e Budapest Orpheum Society was probably the most well-known Jewish Volkssänger ensemble in all of Vienna. Because a monograph and several articles have already been devoted to this subject, I oﬀ er here only a brief outline of the group’s history.83 Th e reference to Budapest in the name is linked to the group’s origins. Some members of the ensemble, though they were for the most part originally from Vienna, had previously worked in the Hungarian capital. Th e reason for this was that Budapest was the central European center of Jewish jargon comedy, and it had a much larger and more vivid entertainment scene than Vienna.84 In addition, the large singspiel halls that were mostly directed by Jewish impresarios held their performances in German, which meant that Viennese entertainers did not have to contend with a language barrier. Georg Wacks explains that Matthias Bernhard Lautzky (18 19–1901), who had a license to operate a singspiel hall, traveled to Budapest in the spring of 1889 to ﬁ nd Volkssänger willing to join him in establishing his own ensemble in Vienna.85 He quickly found what he was looking for. Together with Josef Modl (1863–1915), who was also a well-known folk singer, Lautzky founded the Budapest Orpheum Society.86 Modl was in charge of the artistic direction. We should note here that Lautzky was not Jewish. In establishing with Modl one of the most important and famous entertainment groups in Vienna, Lautzky serves as a prime example for the mutual cooperation between Jews and non-Jews in the creation of popular cultural entertainment forms in the Habsburg metropolis. Initially, Lautzky and Modl chose the hotel Zum Schwarzen Adler, located i n 11 Taborstrasse, as the performance venue for the Budapest Orpheum Society. This open access edition has been made available under a CC BY 4.0 license thanks to the support of Knowledge Unlatched.
zurück zum  Buch Entangled Entertainers - Jews and Popular Culture in Fin-de-Siècle Vienna"
Entangled Entertainers Jews and Popular Culture in Fin-de-Siècle Vienna