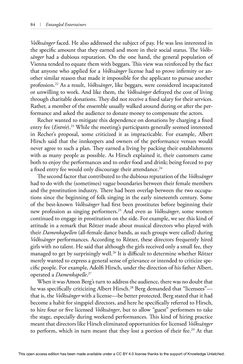 84 | Entangled Entertainers Volkssänger faced. He also addressed the subject of pay. He was less interested in the speciﬁ c amount that they earned and more in their social status. Th e Volks- sänger had a dubious reputation. On the one hand, the general population of Vienna tended to equate them with beggars. Th is view was reinforced by the fact that anyone who applied for a Volkssänger license had to prove inﬁ rmity or an- other similar reason that made it impossible for the applicant to pursue another profession.22 As a result, Volkssänger, like beggars, were considered incapacitated or unwilling to work. And like them, the Volkssänger defrayed the cost of living through charitable donations. Th ey did not receive a ﬁ xed salary for their services. Rather, a member of the ensemble usually walked around during or after the per- formance and asked the audience to donate money to compensate the actors. Recher wanted to mitigate this dependence on donations by charging a ﬁ xed entry fee (Entrée).23 While the meeting’s participants generally seemed interested in R echer’s proposal, some criticized it as impracticable. For example, Albert Hirsch said that the innkeepers and owners of the performance venues would never agree to such a plan. Th ey earned a living by packing their establishments with as many people as possible. As Hirsch explained it, their customers came both to enjoy the performances and to order food and drink; being forced to pay a ﬁ xed entry fee would only discourage their attendance.24 Th e second factor that contributed to the dubious reputation of the Volkssänger had to do with the (sometimes) vague boundaries between their female members and the prostitution industry. Th ere had been overlap between the two occupa- tions since the beginning of folk singing in the early nineteenth century. Some of the best-known Volkssänger had ﬁ rst been prostitutes before beginning their new profession as singing performers.25 And even as Volkssänger, some women continued to engage in prostitution on the side. For example, we see this kind of attitude in a remark that Rötzer made about musical directors who played with their Damenkapellen (all-female dance bands, as such groups were called) during Volkssänger performances. According to Rötzer, these directors frequently hired girls with no talent. He said that although the girls received only a small fee, they managed to get by surprisingly well.26 It is diﬃ cult to determine whether Rötzer merely wanted to express a general sense of grievance or intended to criticize spe- ciﬁ c people. For example, Adolﬁ Hirsch, under the direction of his father Albert, operated a Damenkapelle.27 When it was Amon Berg’s turn to address the audience, there was no d oubt that he was speciﬁ cally criticizing Albert Hirsch.28 Berg demanded that “licensees”— that is, the Volkssänger with a license—be better protected. Berg stated that it had become a habit for singspiel directors, and here he speciﬁ cally referred to Hirsch, to hire four or ﬁ ve licensed Volkssänger, but to allow “guest” performers to take the stage, especially during weekend performances. Th is kind of hiring practice meant that directors like Hirsch eliminated opportunities for licensed Volkssänger to perform, which in turn meant that they lost a portion of their fee.29 At that This open access edition has been made available under a CC BY 4.0 license thanks to the support of Knowledge Unlatched.
zurück zum  Buch Entangled Entertainers - Jews and Popular Culture in Fin-de-Siècle Vienna"
Entangled Entertainers Jews and Popular Culture in Fin-de-Siècle Vienna