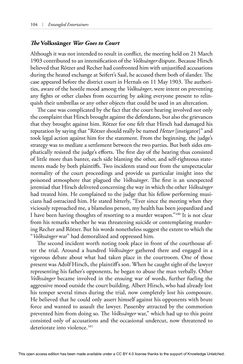 104 | Entangled Entertainers Th e Volkssänger War Goes to Court Although it was not intended to result in conﬂ ict, the meeting held on 21 March 1903 contributed to an intensiﬁ cation of the Volkssänger dispute. Because Hirsch believed that Rötzer and Recher had confronted him with unjustiﬁ ed accusations during the heated exchange at Seifert’s Saal, he accused them both of slander. Th e case appeared before the district court in Hernals on 11 May 1903. Th e authori- ties, aware of the hostile mood among the Volkssänger, were intent on preventing any ﬁ ghts or other clashes from occurring by asking everyone present to relin- quish their umbrellas or any other objects that could be used in an altercation. Th e case was complicated by the fact that the court hearing involved not only the complaint that Hirsch brought against the defendants, but also the grievances that they brought against him. Rötzer for one felt that Hirsch had damaged his reputation by saying that “Rötzer should really be named Hetzer [instigator]” and took legal action against him for the statement. From the beginning, the judge’s strategy was to mediate a settlement between the two parties. But both sides em- phatically resisted the judge’s eﬀ orts. Th e ﬁ rst day of the hearing thus consisted of little more than banter, each side blaming the other, and self-righteous state- ments made by both plaintiﬀ s. Two incidents stand out from the unspectacular normality of the court proceedings and provide us particular insight into the poisoned atmosphere that plagued the Volkssänger. Th e ﬁ rst is an unexpected jeremiad that Hirsch delivered concerning the way in which the other Volkssänger had treated him. He complained to the judge that his fellow performing musi- cians had ostracized him. He stated bitterly, “Ever since the meeting when they viciously reproached me, a blameless person, my health has been jeopardized and I have been having thoughts of resorting to a murder weapon.”100 It is not clear from his remarks whether he was threatening suicide or contemplating murder- ing Recher and Rötzer. But his words nonetheless suggest the extent to which the “Volkssänger war” had demoralized and oppressed him. Th e second incident worth noting took place in front of the courthouse af- ter the trial. Around a hundred Volkssänger gathered there and engaged in a vigorous debate about what had taken place in the courtroom. One of those present was Adolf Hirsch, the plaintiﬀ ’s son. When he caught sight of the lawyer representing his father’s opponents, he began to abuse the man verbally. Other Volkssänger became involved in the ensuing war of words, further fueling the aggressive mood outside the court building. Albert Hirsch, who had already lost his temper several times during the trial, now completely lost his composure. He believed that he could only assert himself against his opponents with brute force and wanted to assault the lawyer. Passersby attracted by the commotion prevented him from doing so. Th e Volkssänger war,” which had up to this point consisted only of accusations and the occasional undercut, now threatened to deteriorate into violence.101 This open access edition has been made available under a CC BY 4.0 license thanks to the support of Knowledge Unlatched.
zurück zum  Buch Entangled Entertainers - Jews and Popular Culture in Fin-de-Siècle Vienna"
Entangled Entertainers Jews and Popular Culture in Fin-de-Siècle Vienna