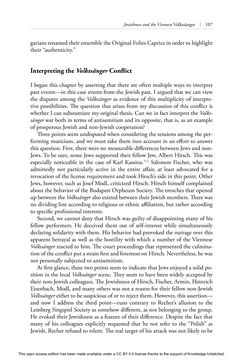 Jewishness and the Viennese Volkssänger | 107 garians renamed their ensemble the Original Folies Caprice in order to highlight their “authenticity.” Interpreting the Volkssänger Conﬂ ict I began this chapter by asserting that there are often multiple ways to interpret past events—in this case events from the Jewish past. I argued that we can view the disputes among the Volkssänger as evidence of this multiplicity of interpre- tive possibilities. Th e question that arises from my discussion of this conﬂ ict is whether I can substantiate my original thesis. Can we in fact interpret the Volks- sänger war both in terms of antisemitism and its opposite, that is, as an example of prosperous Jewish and non-Jewish cooperation? Th ree points seem undisputed when considering the tensions among the per- forming musicians, and we must take them into account in an eﬀ ort to answer this question. First, there were no measurable diﬀ erences between Jews and non- Jews. To be sure, some Jews supported their fellow Jew, Albert Hirsch. Th is was especially noticeable in the case of Karl Kassina.112 Salomon Fischer, who was admittedly not particularly active in the entire aﬀ air, at least advocated for a revocation of the license requirement and took Hirsch’s side in this point. Other Jews, however, such as Josef Modl, criticized Hirsch. Hirsch himself complained about the behavior of the Budapest Orpheum Society. Th e trenches that opened up between the Volkssänger also existed between their Jewish members. Th ere was no dividing line according to religious or ethnic aﬃ liation, but rather according to speciﬁ c professional interests. Second, we cannot deny that Hirsch was guilty of disappointing many of his fellow performers. He deceived them out of self-interest while simultaneously declaring solidarity with them. His behavior had provoked the outrage over this apparent betrayal as well as the hostility with which a number of the Viennese Volkssänger reacted to him. Th e court proceedings that represented the culmina- tion of the conﬂ ict put a strain ﬁ rst and foremost on Hirsch. Nevertheless, he was not personally subjected to antisemitism. At ﬁ rst glance, these two points seem to indicate that Jews enjoyed a solid po- sition in the local Volkssänger scene. Th ey seem to have been widely accepted by their non-Jewish colleagues. Th e Jewishness of Hirsch, Fischer, Armin, Heinrich Eisenbach, Modl, and many others was not a reason for their fellow non-Jewish Volkssänger either to be suspicious of or to reject them. However, this assertion— and now I address the third point—runs contrary to Recher’s allusion to the Lemberg Singspiel Society as somehow diﬀ erent, as not belonging to the group. He evoked their Jewishness as a feature of their diﬀ erence. Despite the fact that many of his colleagues explicitly requested that he not refer to the “Polish” as Jewish, Recher refused to relent. Th e real target of his attack was not likely to be This open access edition has been made available under a CC BY 4.0 license thanks to the support of Knowledge Unlatched.
zurück zum  Buch Entangled Entertainers - Jews and Popular Culture in Fin-de-Siècle Vienna"
Entangled Entertainers Jews and Popular Culture in Fin-de-Siècle Vienna