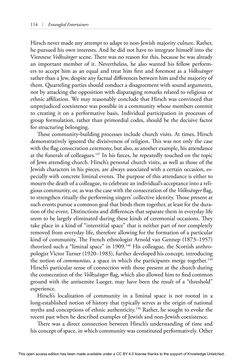 114 | Entangled Entertainers Hirsch never made any attempt to adapt to non-Jewish majority culture. Rather, he pursued his own interests. And he did not have to integrate himself into the Viennese Volkssänger scene. Th ere was no reason for this, because he was already an important member of it. Nevertheless, he also wanted his fellow perform- ers to accept him as an equal and treat him ﬁ rst and foremost as a Volkssänger rather than a Jew, despite any factual diﬀ erences between him and the majority of them. Quarreling parties should conduct a disagreement with sound arguments, not by attacking the opposition with disparaging remarks related to religious or ethnic aﬃ liation. We may reasonably conclude that Hirsch was convinced that unprejudiced coexistence was possible in a community whose members commit to creating it on a performative basis. Individual participation in processes of group formulation, rather than primordial codes, should be the decisive factor for structuring belonging. Th ese community-building processes include church visits. At times, Hirsch demonstratively ignored the divisiveness of religion. Th is was not only the case with the ﬂ ag consecration ceremony, but also, as another example, his attendance at the funerals of colleagues.147 In his farces, he repeatedly touched on the topic of Jews attending church. Hirsch’s personal church visits, as well as those of the Jewish characters in his pieces, are always associated with a certain occasion, es- pecially with concrete liminal events. Th e purpose of this attendance is either to mourn the death of a colleague, to celebrate an individual’s acceptance into a reli- gious community, or, as was the case with the consecration of the Volkssänger ﬂ ag, to strengthen ritually the performing singers’ collective identity. Th ose present at such events pursue a common goal that binds them together, at least for the dura- tion of the event. Distinctions and diﬀ erences that separate them in everyday life seem to be largely eliminated during these kinds of ceremonial occasions. Th ey take place in a kind of “interstitial space” that is neither part of nor completely removed from everyday life, therefore allowing for the formation of a particular kind of community. Th e French ethnologist Arnold van Gennep (1873–1957) theorized such a “liminal space” in 1909.148 His colleague, the Scottish anthro- pologist Victor Turner (1920–1983), further developed his concept, introducing the notion of communitas, a space in which the participants merge together.149 Hirsch’s particular sense of connection with those present at the church during the consecration of the Volkssänger ﬂ ag, which also allowed him to ﬁ nd common ground with the antisemite Lueger, may have been the result of a “threshold” experience. Hirsch’s localization of community in a liminal space is not rooted in a long-established notion of history that typically serves as the origin of national myths and conceptions of ethnic authenticity.150 Rather, he sought to evoke the recent past when he described examples of Jewish and non-Jewish coexistence. Th ere was a direct connection between Hirsch’s understanding of time and his concept of space, in which community was constituted performatively. Other This open access edition has been made available under a CC BY 4.0 license thanks to the support of Knowledge Unlatched.
zurück zum  Buch Entangled Entertainers - Jews and Popular Culture in Fin-de-Siècle Vienna"
Entangled Entertainers Jews and Popular Culture in Fin-de-Siècle Vienna