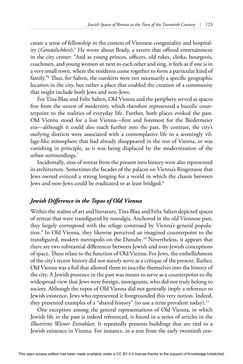 Jewish Spaces of Retreat at the Turn of the Twentieth Century | 123 create a sense of fellowship in the context of Viennese congeniality and hospital- ity (G emütlichkeit).5 He wrote about Brady, a tavern that oﬀ ered entertainment in the city center: “And as young princes, oﬃ cers, old rakes, clerks, bourgeois, coachmen, and young women sit next to each other and sing, it feels as if one is in a very small town, where the residents come together to form a particular kind of family.”6 Th us, for Salten, the outskirts were not necessarily a speciﬁ c geographic location in the city, but rather a place that enabled the creation of a community that might include both Jews and non-Jews. For Tina Blau and Felix Salten, Old Vienna and the periphery served as spaces free from the unrest of modernity, which therefore represented a bucolic coun- terpoint to the realities of everyday life. Further, both places evoked the past. Old Vienna stood for a lost Vienna—ﬁ rst and foremost for the Bi edermeier era—although it could also reach further into the past. By contrast, the city’s outlying districts were associated with a contemplative life in a seemingly vil- lage-like atmosphere that had already disappeared in the rest of Vienna, or was vanishing in principle, as it was being displaced by the modernization of the urban surroundings.7 Incidentally, sites of retreat from the present into history were also represented in architecture. Sometimes the facades of the palaces on Vienna’s Ri ngstrasse that Jews owned evinced a strong longing for a world in which the chasm between Jews and non-Jews could be eradicated or at least bridged.8 Jewish Diﬀ erence in the Topos of Old Vienna Within the realms of art and literature, Tina Blau and Felix Salten depicted spaces of retreat that were transﬁ gured by nostalgia. Anchored in the old Viennese past, they largely correspond with the refuge construed by Vienna’s general popula- tion.9 In Old Vienna, they likewise perceived an imagined counterpoint to the transﬁ gured, modern metropolis on the Danube.10 Nevertheless, it appears that there are two substantial diﬀ erences between Jewish and non-Jewish conceptions of space. Th ese relate to the function of Old Vienna. For Jews, the embellishment of the city’s recent history did not merely serve as a critique of the present. Rather, Old Vienna was a foil that allowed them to inscribe themselves into the history of the city. A Jewish presence in the past was meant to serve as a counterpoint to the widespread view that Jews were foreign, immigrants, who did not truly belong to society. Although the topos of Old Vienna did not generally imply a reference to Jewish existence, Jews who represented it foregrounded this very notion. Indeed, they presented examples of a “shared history” (to use a term prevalent today).11 One exception among the general representations of Old Vienna, in which Jewish life in the past is indeed referenced, is found in a series of articles in the Illustrirtes Wiener Extrablatt. It repeatedly presents buildings that are tied to a Jewish existence in Vienna. For instance, in a text from the early twentieth cen- This open access edition has been made available under a CC BY 4.0 license thanks to the support of Knowledge Unlatched.
zurück zum  Buch Entangled Entertainers - Jews and Popular Culture in Fin-de-Siècle Vienna"
Entangled Entertainers Jews and Popular Culture in Fin-de-Siècle Vienna