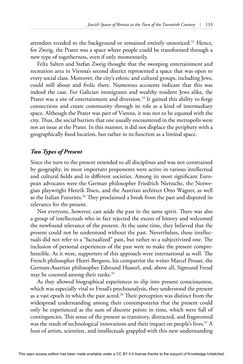 Jewish Spaces of Retreat at the Turn of the Twentieth Century | 133 attendees receded to the background or remained entirely unnoticed.52 Hence, for Zweig, the Prater was a space where people could be transformed through a new type of togetherness, even if only momentarily. Felix Salten and Stefan Zweig thought that the sweeping entertainment and recreation area in Vienna’s second district represented a space that was open to every social class. Moreover, the city’s ethnic and cultural groups, including Jews, could mill about and frolic there. Numerous accounts indicate that this was indeed the case. For Galician immigrants and wealthy resident Jews alike, the Prater was a site of entertainment and diversion.53 It gained this ability to forge connections and create community through its role as a kind of intermediary space. Although the Prater was part of Vienna, it was not to be equated with the city. Th us, the social barriers that one usually encountered in the metropolis were not an issue at the Prater. In this manner, it did not displace the periphery with a geographically ﬁ xed location, but rather in its function as a liminal space. Two Types of Present Since the turn to the present extended to all disciplines and was not constrained by geography, its most important proponents were active in various intellectual and cultural ﬁ elds and in diﬀ erent societies. Among its most signiﬁ cant Euro- pean advocates were the German philosopher Friedrich Nietzsche, the Norwe- gian playwright Henrik Ibsen, and the Austrian architect Otto Wagner, as well as the Italian Futurists.54 Th ey proclaimed a break from the past and disputed its relevance for the present. Not everyone, however, cast aside the past in the same spirit. Th ere was also a group of intellectuals who in fact rejected the excess of history and welcomed the newfound relev ance of the present. At the same time, they believed that the present could not be understood without the past. Nevertheless, these intellec- tuals did not refer to a “factualized” past, but rather to a subjectivized one. Th e inclusion of personal experiences of the past were to make the present compre- hensible. As it were, supporters of this approach were international as well. Th e French philosopher Henri Bergson, his compatriot the writer Marcel Proust, the German-Austrian philosopher Edmund Husserl, and, above all, Sigmund Freud may be counted among their ranks.55 As they allowed biographical experiences to slip into present consciousness, which was especially vital to Freud’s psychoanalysis, they understood the present as a vast epoch in which the past acted.56 Th eir perception was distinct from the widespread understanding among their contemporaries that the present could only be experienced as the sum of discrete points in time, which were full of contingencies. Th is sense of the present as transitory, distracted, and fragmented was the result of technological innovations and their impact on people’s lives.57 A host of artists, scientists, and intellectuals grappled with this new understanding This open access edition has been made available under a CC BY 4.0 license thanks to the support of Knowledge Unlatched.
zurück zum  Buch Entangled Entertainers - Jews and Popular Culture in Fin-de-Siècle Vienna"
Entangled Entertainers Jews and Popular Culture in Fin-de-Siècle Vienna