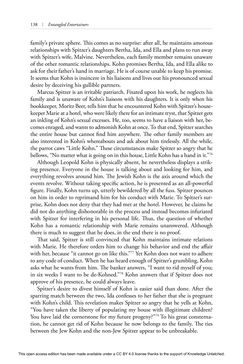 138 | Entangled Entertainers family’s private sphere. Th is comes as no surprise: after all, he maintains amorous relationships with Spitzer’s daughters Bertha, Ida, and Ella and plans to run away with Spitzer’s wife, Malvine. Nevertheless, each family member remains unaware of the other romantic relationships. Kohn promises Bertha, Ida, and Ella alike to ask for their father’s hand in marriage. He is of course unable to keep his promise. It seems that Kohn is insincere in his liaisons and lives out his pronounced sexual desire by deceiving his gullible partners. Marcus Spitzer is an irritable patriarch. Fixated upon his work, he neglects his family and is unaware of Kohn’s liaisons with his daughters. It is only when his bookkeeper, Moritz Beer, tells him that he encountered Kohn with Spitzer’s house- keeper Marie at a hotel, who were likely there for an intimate tryst, that Spitzer gets an inkling of Kohn’s sexual excesses. He, too, seems to have a liaison with her, be- comes enraged, and wants to admonish Kohn at once. To that end, Spitzer searches the entire house but cannot ﬁ nd him anywhere. Th e other family members are also interested in Kohn’s whereabouts and ask about him tirelessly. All the while, the parrot caws “Little Kohn.” Th ese circumstances make Spitzer so angry that he bellows, “No matter what is going on in this house, Little Kohn has a hand in it.”76 Although Leopold Kohn is physically absent, he nevertheless displays a strik- ing presence. Everyone in the house is talking about and looking for him, and everything revolves around him. Th e Jewish Kohn is the axis around which the events revolve. Without taking speciﬁ c action, he is presented as an all-powerful ﬁ gure. Finally, Kohn turns up, utterly bewildered by all the fuss. Spitzer pounces on him in order to reprimand him for his conduct with Marie. To Spitzer’s sur- prise, Kohn does not deny that they had met at the hotel. However, he claims he did not do anything dishonorable in the process and instead becomes infuriated with Spitzer for interfering in his personal life. Th us, the question of whether Kohn has a romantic relationship with Marie remains unanswered. Although there is much to suggest that he does, in the end there is no proof. Th at said, Spitzer is still convinced that Kohn maintains intimate relations with Marie. He therefore orders him to change his behavior and end the aﬀ air with her, because “it cannot go on like this.”77 Yet Kohn does not want to adhere to any code of conduct. When he has heard enough of Spitzer’s grumbling, Kohn asks what he wants from him. Th e banker answers, “I want to rid myself of you; in six weeks I want to be de-Kohned.”78 Kohn answers that if Spitzer does not approve of his presence, he could always leave. Spitzer’s desire to divest himself of Kohn is easier said than done. After the sparring match between the two, Ida confesses to her father that she is pregnant with Kohn’s child. Th is revelation makes Spitzer so angry that he yells at Kohn, “You have taken the liberty of populating my house with illegitimate children? You have laid the cornerstone for my future progeny?”79 To his great consterna- tion, he cannot get rid of Kohn because he now belongs to the family. Th e ties between the Jew Kohn and the non-Jew Spitzer appear to be unbreakable. This open access edition has been made available under a CC BY 4.0 license thanks to the support of Knowledge Unlatched.
zurück zum  Buch Entangled Entertainers - Jews and Popular Culture in Fin-de-Siècle Vienna"
Entangled Entertainers Jews and Popular Culture in Fin-de-Siècle Vienna