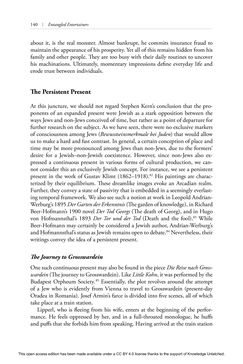 140 | Entangled Entertainers about it, is the real monster. Almost bankrupt, he commits insurance fraud to maintain the appearance of his prosperity. Yet all of this remains hidden from his family and other people. Th ey are too busy with their daily routines to uncover his machinations. Ultimately, momentary impressions deﬁ ne everyday life and erode trust between individuals. Th e Persistent Present At this juncture, we should not regard Stephen Kern’s conclusion that the pro- ponents of an expanded present were Jewish as a stark opposition between the ways Jews and non-Jews conceived of time, but rather as a point of departure for further research on the subject. As we have seen, there were no exclusive markers of consciousness among Jews (Bewussts einsmerkmale bei Juden) that would allow us to make a hard and fast contrast. In general, a certain conception of place and time may be more pronounced among Jews than non-Jews, due to the formers’ desire for a Jewish–non-Jewish coexistence. However, since non-Jews also ex- pressed a continuous present in various forms of cultural production, we can- not consider this an exclusively Jewish concept. For instance, we see a persistent present in the work of Gustav K limt (1862–1918).82 His paintings are charac- terized by their equilibrium. Th ese dreamlike images evoke an Arcadian realm. Further, they convey a state of passivity that is embedded in a seemingly everlast- ing temporal framework. We also see such a notion at work in Leopold Andrian- Werburg’s 1895 Der Garten der Erkenntnis (Th e garden of knowledge), in Richard Beer-Hofmann’s 1900 novel Der Tod Georgs (Th e death of Georg), and in Hugo von Hofmannsthal’s 1893 Der Tor und der Tod (Death and the fool).83 While Beer-Hofmann may certainly be considered a Jewish author, Andrian-Werburg’s and Hofmannsthal’s status as Jewish remains open to debate.84 Nevertheless, their writings convey the idea of a persistent present. Th e Journey to Grosswardein One such continuous present may also be found in the piece Die Reise nach Gross- wardein (Th e journey to Grosswardein). Like Little Kohn, it was performed by the Budapest Orpheum Society.85 Essentially, the plot revolves around the attempt of a Jew who is evidently from Vienna to travel to Grosswar dein (present-day Oradea in Romania). Josef Armin’s farce is divided into ﬁ ve scenes, all of which take place at a train station. Lipperl, who is ﬂ eeing from his wife, enters at the beginning of the perfor- mance. He feels oppressed by her, and in a full-throated monologue, he huﬀ s and puﬀ s that she forbids him from speaking. Having arrived at the train station This open access edition has been made available under a CC BY 4.0 license thanks to the support of Knowledge Unlatched.
zurück zum  Buch Entangled Entertainers - Jews and Popular Culture in Fin-de-Siècle Vienna"
Entangled Entertainers Jews and Popular Culture in Fin-de-Siècle Vienna