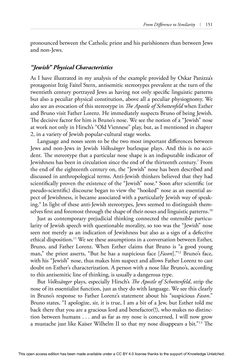 From Diﬀ erence to Similarity | 151 pronounced between the Catholic priest and his parishioners than between Jews and non-Jews. “Jewish” Physical Characteristics As I have illustrated in my analysis of the example provided by Oskar Panizza’s protagonist Itzig Faitel Stern, antisemitic stereotypes prevalent at the turn of the twentieth century portrayed Jews as having not only speciﬁ c linguistic patterns but also a peculiar physical constitution, above all a peculiar physiognomy. We also see an evocation of this stereotype in Th e Apostle of Schottenfeld when Esther and Bruno visit Father Lorenz. He immediately suspects Bruno of being Jewish. Th e decisive factor for him is Bruno’s nose. We see the notion of a “Jewish” nose at work not only in Hirsch’s “Old Viennese” play, but, as I mentioned in chapter 2, in a variety of Jewish popular-cultural stage works. Language and noses seem to be the two most important diﬀ erences between Jews and non-Jews in Jewish Volkssänger burlesque plays. And this is no acci- dent. Th e stereotype that a particular nose shape is an indisputable indicator of Jewishness has been in circulation since the end of the thirteenth century.7 From the end of the eighteenth century on, the “Jewish” nose has been described and discussed in anthropological terms. Anti-Jewish thinkers believed that they had scientiﬁ cally proven the existence of the “Jewish” nose.8 Soon after scientiﬁ c (or pseudo-scientiﬁ c) discourse began to view the “hooked” nose as an essential as- pect of Jewishness, it became associated with a particularly Jewish way of speak- ing.9 In light of these anti-Jewish stereotypes, Jews seemed to distinguish them- selves ﬁ rst and foremost through the shape of their noses and linguistic patterns.10 Just as contemporary prejudicial thinking connected the ostensible particu- larity of Jewish speech with questionable morality, so too was the “Jewish” nose seen not merely as an indication of Jewishness but also as a sign of a defective ethical disposition.11 We see these assumptions in a conversation between Esther, Bruno, and Father Lorenz. When Esther claims that Bruno is “a good young man,” the priest asserts, “But he has a suspicious face [Fason].”12 Bruno’s face, with his “Jewish” nose, thus makes him suspect and allows Father Lorenz to cast doubt on Esther’s characterization. A person with a nose like Bruno’s, according to this antisemitic line of thinking, is usually a dangerous type. But Volkssänger plays, especially Hirsch’s Th e Apostle of Schottenfeld, strip the nose of its essentialist function, just as they do with language. We see this clearly in Bruno’s response to Father Lorenz’s statement about his “suspicious Fason.” Bruno states, “I apologize, sir, it is true, I am a bit of a Jew, but Esther told me back there that you are a gracious lord and benefactor(!), who makes no distinc- tion between humans . . . and as far as my nose is concerned, I will now grow a mustache just like Kaiser Wilhelm II so that my nose disappears a bit.”13 Th e This open access edition has been made available under a CC BY 4.0 license thanks to the support of Knowledge Unlatched.
zurück zum  Buch Entangled Entertainers - Jews and Popular Culture in Fin-de-Siècle Vienna"
Entangled Entertainers Jews and Popular Culture in Fin-de-Siècle Vienna