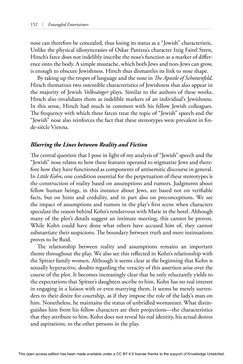 152 | Entangled Entertainers nose can therefore be concealed, thus losing its status as a “Jewish” characteristic. Unlike the physical idiosyncrasies of Oskar Panizza’s character Itzig Faitel Stern, Hirsch’s farce does not indelibly inscribe the nose’s function as a marker of diﬀ er- ence onto the body. A simple mustache, which both Jews and non-Jews can grow, is enough to obscure Jewishness. Hirsch thus dismantles its link to nose shape. By taking up the tropes of language and the nose in Th e Apostle of Schottenfeld, Hirsch thematizes two ostensible characteristics of Jewishness that also appear in the majority of Jewish Volkssänger plays. Similar to the authors of these works, Hirsch also invalidates them as indelible markers of an individual’s Jewishness. In this sense, Hirsch had much in common with his fellow Jewish colleagues. Th e frequency with which these farces treat the topic of “Jewish” speech and the “Jewish” nose also reinforces the fact that these stereotypes were prevalent in ﬁ n- de-siècle Vienna. Blurring the Lines between Reality and Fiction Th e central question that I pose in light of my analysis of “Jewish” speech and the “Jewish” nose relates to how these features operated to stigmatize Jews and there- fore how they have functioned as components of antisemitic discourse in general. In Little Kohn, one condition essential for the perpetuation of these stereotypes is the construction of reality based on assumptions and rumors. Judgments about fellow human beings, in this instance about Jews, are based not on veriﬁ able facts, but on hints and credulity, and in part also on preconceptions. We see the impact of assumptions and rumors in the play’s ﬁ rst scene when characters speculate the reason behind Kohn’s rendezvous with Marie in the hotel. Although many of the plot’s details suggest an intimate meeting, this cannot be proven. While Kohn could have done what others have accused him of, they cannot substantiate their suspicions. Th e boundary between truth and mere insinuations proves to be ﬂ uid. Th e relationship between reality and assumptions remains an important theme throughout the play. We also see this reﬂ ected in Kohn’s relationship with the Spitzer family women. Although it seems clear at the beginning that Kohn is sexually hyperactive, doubts regarding the veracity of this assertion arise over the course of the plot. It becomes increasingly clear that he only reluctantly yields to the expectations that Spitzer’s daughters ascribe to him. Kohn has no real interest in engaging in a liaison with or even marrying them. It seems he merely surren- ders to their desire for courtship, as if they impose the role of the lady’s man on him. Nonetheless, he maintains the status of unbridled womanizer. What distin- guishes him from his fellow characters are their projections—the characteristics that they attribute to him. Kohn does not reveal his real identity, his actual desires and aspirations, to the other persons in the play. This open access edition has been made available under a CC BY 4.0 license thanks to the support of Knowledge Unlatched.
zurück zum  Buch Entangled Entertainers - Jews and Popular Culture in Fin-de-Siècle Vienna"
Entangled Entertainers Jews and Popular Culture in Fin-de-Siècle Vienna