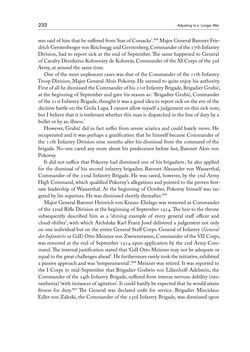 232 Adjusting to a Longer War was said of him that he suffered from ‘fear of Cossacks’.558 Major General Baronet Frie- drich Gerstenberger von Reichsegg und Gerstenberg, Commander of the 27th Infantry Division, had to report sick at the end of September. The same happened to General of Cavalry Desiderius Kolossváry de Kolosvár, Commander of the XI Corps of the 3rd Army, at around the same time. One of the most unpleasant cases was that of the Commander of the 11th Infantry Troop Division, Major General Alois Pokorny. He seemed to quite enjoy his authority. First of all he dismissed the Commander of his 21st Infantry Brigade, Brigadier Grubić, at the beginning of September and gave his reason as : ‘Brigadier Grubić, Commander of the 21st Infantry Brigade, thought it was a good idea to report sick on the eve of the decisive battle on the Gnila Lapa. I cannot allow myself a judgement on this sick note, but I believe that it is irrelevant whether this man is dispatched in the line of duty by a bullet or by an illness.’ However, Grubić did in fact suffer from severe sciatica and could barely move. He recuperated and it was perhaps a gratification that he himself became Commander of the 11th Infantry Division nine months after his dismissal from the command of the brigade. No-one cared any more about his predecessor before last, Baronet Alois von Pokorny. It did not suffice that Pokorny had dismissed one of his brigadiers ; he also applied for the dismissal of his second infantry brigadier, Baronet Alexander von Wasserthal, Commander of the 22nd Infantry Brigade. He was saved, however, by the 2nd Army High Command, which qualified Pokorny’s allegations and pointed to the proven first- rate leadership of Wasserthal. At the beginning of October, Pokorny himself was tar- geted by his superiors. He was dismissed shortly thereafter.559 Major General Baronet Heinrich von Krauss-Elislago was removed as Commander of the 22nd Rifle Division at the beginning of September 1914. The heir to the throne subsequently described him as a ‘shining example of every general staff officer and cloud-shifter’, with which Archduke Karl Franz Josef delivered a judgement not only on one individual but on the entire General Staff Corps. General of Infantry (General der Infanterie or GdI) Otto Meixner von Zweienstamm, Commander of the VII Corps, was removed at the end of September 1914 upon application by the 2nd Army Com- mand. The internal justification stated that ‘GdI Otto Meixner may not be adequate or equal to the great challenges ahead’. He furthermore rarely took the initiative, exhibited a passive approach and was ‘temperamental’.560 Meixner was retired. It was reported to the I Corps in mid-September that Brigadier Godwin von Lilienhoff-Adelstein, the Commander of the 24th Infantry Brigade, suffered from intense nervous debility (neu- rasthenia) ‘with instances of agitation’. It could hardly be expected that he would attain fitness for duty.561 The General was declared unfit for service. Brigadier Miecislaus Edler von Zaleski, the Commander of the 23rd Infantry Brigade, was dismissed upon
zurück zum  Buch THE FIRST WORLD WAR - and the End of the Habsburg Monarchy, 1914 – 1918"
THE FIRST WORLD WAR and the End of the Habsburg Monarchy, 1914 – 1918
Entnommen aus der FWF-E-Book-Library