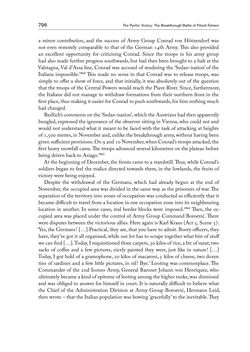 796 The Pyrrhic Victory : The Breakthrough Battle of Flitsch-Tolmein a minor contribution, and the success of Army Group Conrad von Hötzendorf was not even remotely comparable to that of the German 14th Army. This also provided an excellent opportunity for criticising Conrad. Since the troops in his army group had also made further progress southwards, but had then been brought to a halt at the Valstagna, Val d’Assa line, Conrad was accused of rendering the ‘Sedan-isation’ of the Italians impossible.1860 This made no sense in that Conrad was to release troops, was simply to offer a show of force, and that initially, it was absolutely out of the question that the troops of the Central Powers would reach the Piave River. Since, furthermore, the Italians did not manage to withdraw formations from their northern front in the first place, thus making it easier for Conrad to push southwards, for him nothing much had changed. Redlich’s comments on the ‘Sedan-isation’, which the Austrians had then apparently bungled, expressed the ignorance of the observer sitting in Vienna, who could not and would not understand what it meant to be faced with the task of attacking at heights of 1,500 metres, in November and, unlike the breakthrough army, without having been given sufficient provisions. On 9 and 10 November, when Conrad’s troops attacked, the first heavy snowfall came. The troops advanced several kilometres on the plateau before being driven back to Asiago.1861 At the beginning of December, the fronts came to a standstill. Thus, while Conrad’s soldiers began to feel the malice directed towards them, in the lowlands, the fruits of victory were being enjoyed. Despite the withdrawal of the Germans, which had already begun at the end of November, the occupied area was divided in the same way as the prisoners of war. The separation of the territory into zones of occupation was conducted so efficiently that it became difficult to travel from a location in one occupation zone into its neighbouring location in another. In some cases, real border blocks were imposed.1862 Then, the oc- cupied area was placed under the control of Army Group Command Boroević. There were disputes between the victorious allies. Here again is Karl Kraus (Act 5, Scene 5) : ‘Yes, the Germans ! […] Practical, they are, that you have to admit. Booty officers, they have, they’ve got it all organised, while our lot has to scrape together what bits of stuff we can find […]. Today, I requisitioned three carpets, 30 kilos of rice, a bit of meat, two sacks of coffee and a few pictures, nicely painted they were, just like in nature ! […] Today, I got hold of a gramophone, 20 kilos of macaroni, 5 kilos of cheese, two dozen tins of sardines and a few little pictures, in oil ! Bye.’ Looting was commonplace. The Commander of the 2nd Isonzo Army, General Baronet Johann von Henriquez, who ultimately became a kind of epitome of looting among the higher ranks, was dismissed and was obliged to answer for himself in court. It is naturally difficult to believe what the Chief of the Administration Division at Army Group Boroević, Hermann Leid, then wrote  – that the Italian population was bowing ‘gracefully’ to the inevitable. They
zurück zum  Buch THE FIRST WORLD WAR - and the End of the Habsburg Monarchy, 1914 – 1918"
THE FIRST WORLD WAR and the End of the Habsburg Monarchy, 1914 – 1918
Entnommen aus der FWF-E-Book-Library