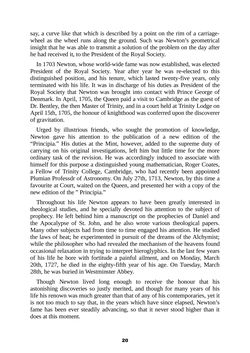 say, a curve like that which is described by a point on the rim of a carriage- wheel as the wheel runs along the ground. Such was Newton’s geometrical insight that he was able to transmit a solution of the problem on the day after he had received it, to the President of the Royal Society. In 1703 Newton, whose world-wide fame was now established, was elected President of the Royal Society. Year after year he was re-elected to this distinguished position, and his tenure, which lasted twenty-five years, only terminated with his life. It was in discharge of his duties as President of the Royal Society that Newton was brought into contact with Prince George of Denmark. In April, 1705, the Queen paid a visit to Cambridge as the guest of Dr. Bentley, the then Master of Trinity, and in a court held at Trinity Lodge on April 15th, 1705, the honour of knighthood was conferred upon the discoverer of gravitation. Urged by illustrious friends, who sought the promotion of knowledge, Newton gave his attention to the publication of a new edition of the “Principia.” His duties at the Mint, however, added to the supreme duty of carrying on his original investigations, left him but little time for the more ordinary task of the revision. He was accordingly induced to associate with himself for this purpose a distinguished young mathematician, Roger Coates, a Fellow of Trinity College, Cambridge, who had recently been appointed Plumian Professdr of Astronomy. On July 27th, 1713, Newton, by this time a favourite at Court, waited on the Queen, and presented her with a copy of the new edition of the ” Principia.” Throughout his life Newton appears to have been greatly interested in theological studies, and he specially devoted his attention to the subject of prophecy. He left behind him a manuscript on the prophecies of Daniel and the Apocalypse of St. John, and he also wrote various theological papers. Many other subjects had from time to time engaged his attention. He studied the laws of heat; he experimented in pursuit of the dreams of the Alchymist; while the philosopher who had revealed the mechanism of the heavens found occasional relaxation in trying to interpret hieroglyphics. In the last few years of his life he bore with fortitude a painful ailment, and on Monday, March 20th, 1727, he died in the eighty-fifth year of his age. On Tuesday, March 28th, he was buried in Westminster Abbey. Though Newton lived long enough to receive the honour that his astonishing discoveries so justly merited, and though for many years of his life his renown was much greater than that of any of his contemporaries, yet it is not too much to say that, in the years which have since elapsed, Newton’s fame has been ever steadily advancing, so that it never stood higher than it does at this moment. 20
zurück zum  Buch Great Astronoms - Isaac Newton"
Great Astronoms Isaac Newton