China is the third-largest country in the world. No wonder that a huge variety of attractions are located here: cultural, natural, historical landmarks can be found on its territory. Some of them, such as the Great Wall of China, are widely known; others are less known. This AirPano virtual tour introduces you to the "Cloudy South": the mountainous and picturesque province of Yunnan.

Our journey begins with the village of Bisezhai, a part of the Mengzi city county. This is one of the many "ethnic villages in China: this is the state definition for the settlements where the representatives of ethnic minorities live. By preserving their historical heritage, traditional architecture, authentic festivals, unique cuisine and crafts, these villages are popular among tourists. 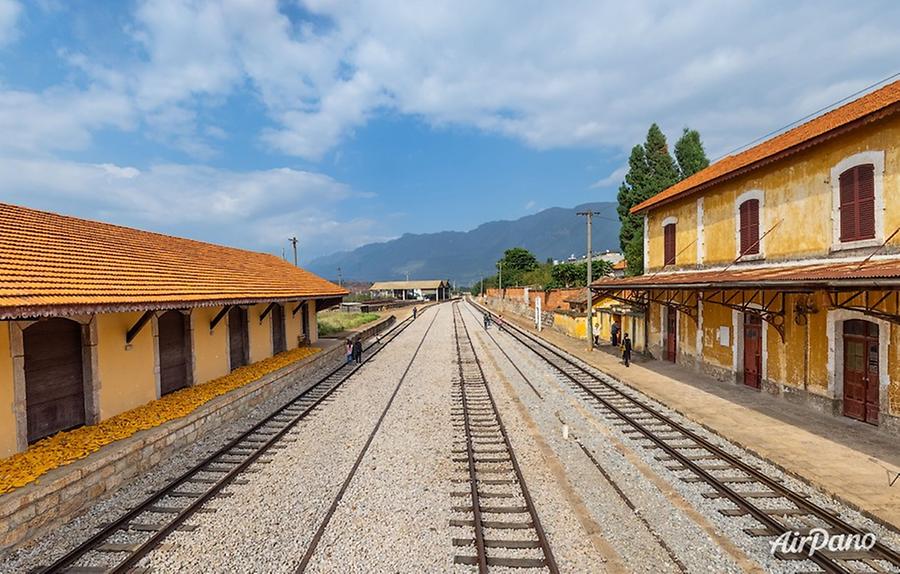 And here is the Bisezhai railway station: one of the oldest in China! At the beginning of the 20th century, there was a need to stretch the rails to the Gejiu tin mines, and the first section of the road, starting in this village, was commissioned in 1918. Today, China is the world's leader in the development of the railway network; nowadays high-speed trains rush down the tracks, but Bisezhai station can take its guests a hundred years ago. And in recent years, it has become especially popular: it was the scene for the 2017 Youth movie (Fang Hua). It is widely known not only in China, but also in Western countries, and many tourists come to see these places with their own eyes.

Another man-made landmark of Yunnan province is the Shuanglong Bridge, installed 2.5 km from the ancient city of Jianshui, at the confluence of the Lu and Tachong rivers. Its name translates as "double dragons: in China, rivers are traditionally compared to these mythological creatures. The bridge was built during the Qing Dynasty under the Qianlong Emperor (1736-1796) and originally had three arches. By the beginning of the 19th century, the rivers were flooded, turning into one wide riverbed. The bridge had to be rebuilt, and since 1839, the water surface has been covered by 17 spans. Then a second name was assigned to the structure: Seventeen-arch bridge. 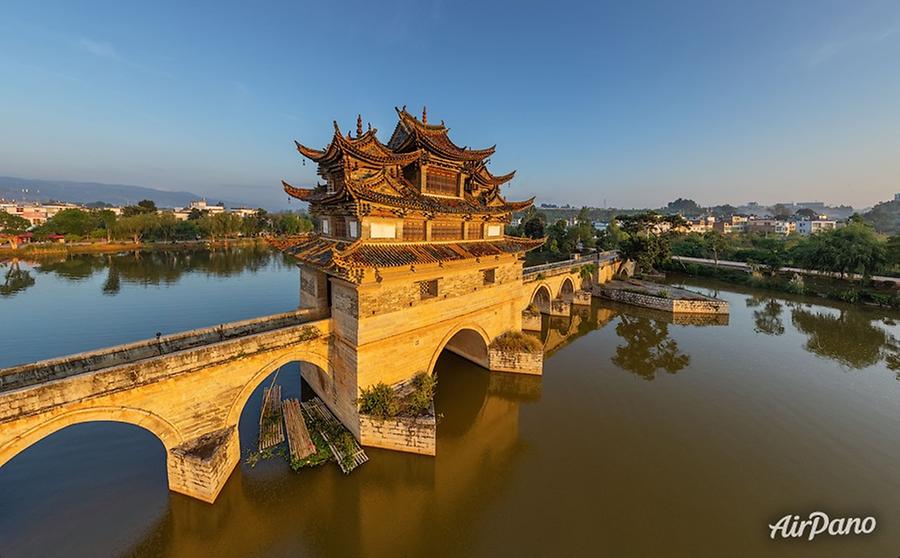 Its height is 9 meters, length — 148.26 meters, width varies from three to eight meters. It is dominated by a three-story elegant tower decorated with engraved images of Buddha, gods, dragons, flowers, plants and animals. From a distance, the bridge looks like a ship sailing on a river. This is the largest surviving ancient bridge in Yunnan. In 2006, it was included in the list of national cultural monuments under state protection. 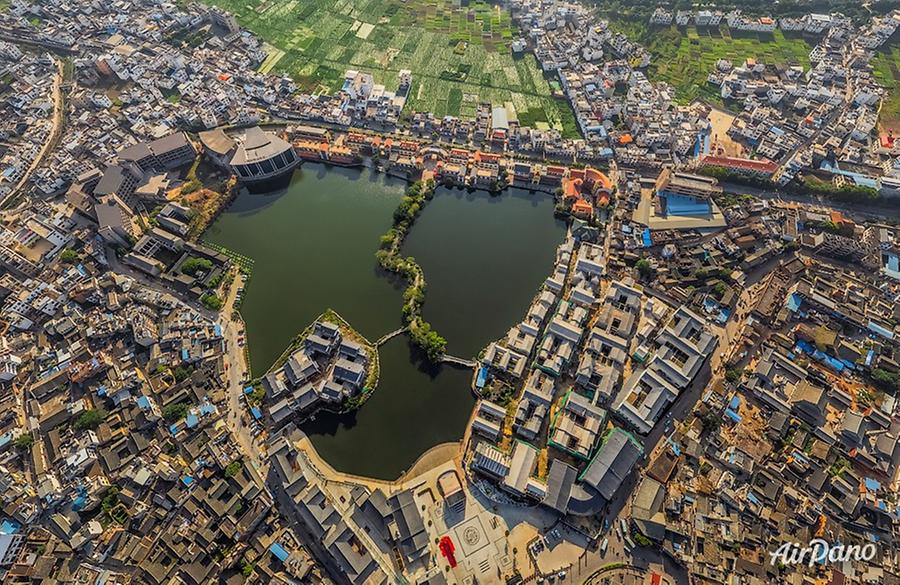 In Yunnan province, there is an unusual city of Jianshui: an open-air museum that attracts lovers of history, architecture and culture. It was built during the Ming Dynasty (1368-1644) and was surrounded by a fortress wall. What has left from it is the two corner towers: Chaoyang and Qingyuan. Chaoyang translates as "Standing in front of the sun": it is oriented to the east. Its outside look resembles the landmark of Beijing, Tiananmen, or "The Gate of Heavenly Peace". However, this coincidence is explained by the tendencies adopted in the architecture of that time: the tower in the capital is only 28 years younger.

The Temple of Confucius in Jianshui is one of the largest Confucian temples in China only preceded by the temple in Qufu, the hometown of the great thinker. It was built in 1285 and has been rebuilt more than 40 times since then. Now it is the most important national centre for the protection of cultural relics. It includes more than 30 free-standing buildings, as well as statues, gates, arches, squares and gardens. Twice a year, during the Spring Festival and on Confucius's birthday, commemorative ceremonies are held in the temple. The most famous place is the Dacheng Hall: 22 doors are decorated with hundreds of birds and animals. A small lake placed opposite the main entrance is covered with blooming lotuses and also belongs to the temple complex: one of the pavilions is installed here.

Yunnan's new sights are as attractive as the old ones. In 2014, the futuristic art village of Dongfengyun was erected in Mile County, 130 kilometres southeast of the provincial capital, Kunming. It was created by Hong Kong-based company Cheng Chung Design and local artist Luo Xu. Ecological agriculture is developing in this picturesque area, there are exhibition and cultural spaces, hotels, lavender thickets, a wine estate, rose gardens, a lily park, a forest on the lakeshore and much more. A group of light brick buildings is the Kaleidoscope Art Museum. Their elongated shape resembles bottles: this is a tribute to the winemaking traditions of the region. If you imagine that the buildings look like tongues of flame, then it will become a symbol of bonfires around which locals dance at the annual festival. Another complex of darker red brick has been compared to a giant termite mound and houses restaurants. 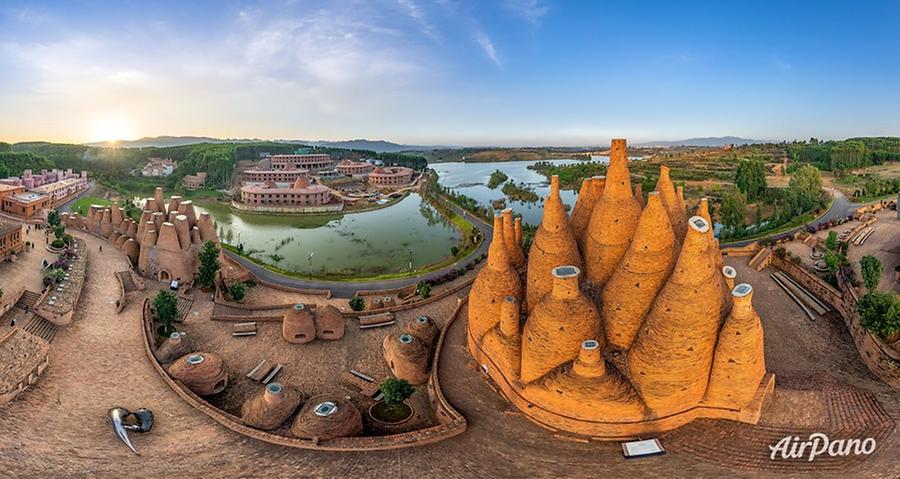 This design seems to be chaotic but it is strictly thought out and based on accurate calculations. During the construction, no steel beams and nails were used: only bricks and metal parts can be seen only inside, as interior elements. Natural light is preferred as the main concept of this complex is harmony with nature. 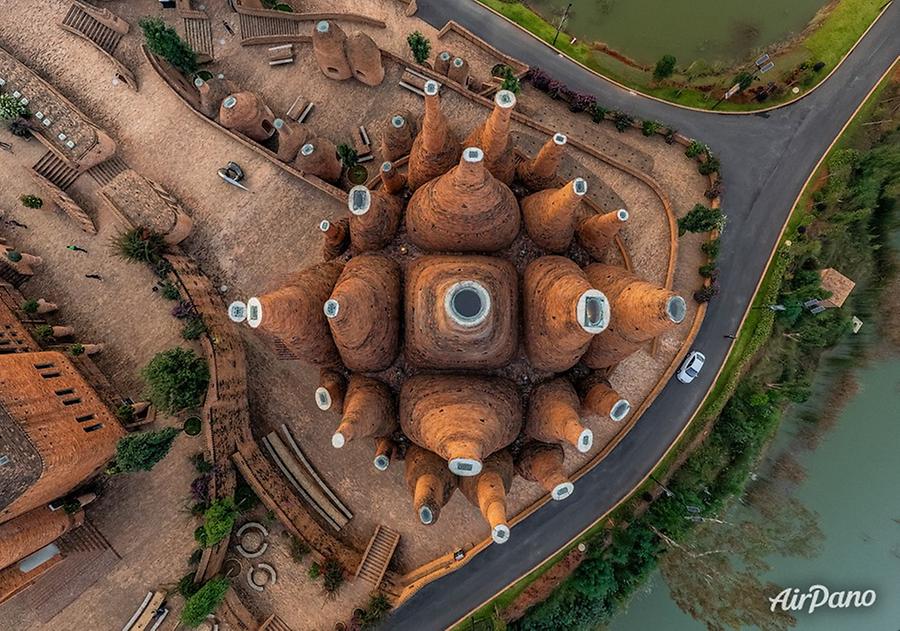 The city is designed as a centre of attraction for tourists and all lovers of beauty. The whole province of Yunnan is also waiting for guests: there is something to admire here. We hope that AirPano panoramas have convinced you of this!