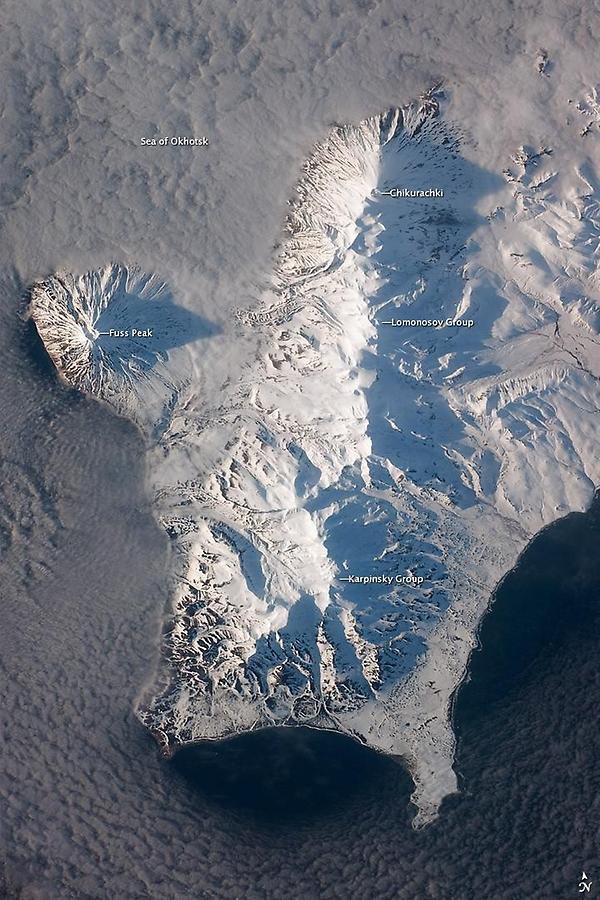 Image courtesy of NASA., under PD
The Kuril Island chain is built from a line of volcanoes, an island arc, that extends from Russias Kamchatka Peninsula to northern Japan. Island arcs form along an active boundary between two tectonic plates, with one being driven beneath the other (subduction).

Magma generated by subduction feeds volcanoes - and eventually volcanic islands - over the subduction boundary. Paramushir Island in the northern Kurils is an example of a large island built by several volcanoes over geologic time. This astronaut photograph shows the southern end of Paramushir Island after a snowfall. The western slopes of the mountains are brightly illuminated, while the eastern slopes are in shadow.

A minor eruption of ash following an earthquake occurred on this part of the island in 1952. The Lomonosov Group to the northeast (image center) includes four cinder cones and a lava dome. The most recent volcanic activity on Paramushir Island occurred in 2008 at the Chikurachki cone located along the northern coastline of the island at image top center.

The summit of this volcano, 1,816 m (5,958 ft) above sea level, is the highest on Paramushir Island. Much of the Sea of Okhotsk visible in the image is covered with low clouds that often form around the islands in the Kuril chain. The clouds are generated by moisture-laden air passing over the cool sea/ocean water, and they typically wrap around the volcanic islands.